Ultima Terra is a locked primal realm that is located in the Earth Zone. It is known to have many similarities to Ancient Earth. The main planet, often called Terra, boasts a population of about 8,800,000,000 people. The Empire has spread out to colonize the entire solar system and over eight hundred different star systems across eight galaxies. The present year on Ultima Terra is 2901.

The economy reflects strong mix of free market and central planning. Banking has a clear divide between utility and gambling, never the twain shall meet. Citizens enjoy single-payer universal coverage for all their insurance needs. All military production is directly controlled by the central government. It’s very easy to start and operate businesses and small private concerns provide most of the jobs. Trans-dimensional trade is vibrant and encouraged, particularly for strategic resources. The realm enjoys a rapid rail link to E1 that will soon be expanding to include other places.

There is a very strong emphasis on education of everyone regardless of their origins or background. Behind this is the firm belief that everyone can and should contribute positively to society. Testing begins at a very early age and there are many formal and informal ways that this is done. For example, it’s widely known that video games are where some of the best and brightest are identified. There is a strong cultural push to put people in places where they will lead satisfying lives of significance by exercising their strengths.

The Imperial High Blood Academy on Ultima Terra is an organization dedicated to providing the best possible environment to educate its students into becoming productive sustaining members of society. After swearing their blood oath of allegiance to the Emperor and undergoing a rigorous testing and evaluation period a student may formally enter the Academy. Each person undergoes a custom curriculum tailored to suit their own individual talents and ambitions. On average, students may  expect to graduate within eight years. Graduates are guaranteed a lifelong career and professional growth opportunities with the Imperial Government. Many a Helgram has graduated from the Academy and now proudly serves the grand interests of Empire. While on a state visit to Ultima Terra, Clarissa Helgram personally toured the Academy facilities and it met with her approval.

Ultima Terra is known to have existed before the birth of Osric and Finndo. The first age was marked by a strong worship of Lucifer and his twin brother Satan before they were treacherously betrayed and their names blackened in all of known Creation. When Eric of Amber ruled over the realm it was known as South Ericland. Rory Merrick was born on what he called the Free Republic and exercised control there for a time by invoking Eric’s name. Lucius conquered the realm with the help of many others and returned it to its original name of Ultima Terra. Lucifer and Satan’s reputations were rehabilitated and many practice the old traditions again.

Lucius Channicut has established a universal government for the entire realm on Terra.  The formal seat of the Empire is located at Malus, often called Dallas in shadow reflections.  Administratively there are eight Provinces that divide the globe largely along traditional continental lines. The legal political party is known as Victory Terra, informally called Hail Lucius. The Party facilitates cooperation in law, security, economic development, social equity, and standardization. Official policy is that the Greater Co-Prosperity Sphere will continuously expand.

The current technology level is above present day real world and magic is potent. Static electricity machines provide a ready source of virtually free power for most mundane things. Colleges have been established to train the natives in magic’s proper use and application to benefit society as if it were just another form of technology.

Notes on Ultima Terra from the Tiereth Envoy’s Guide

Yeah, uh…no.  On no account should you visit this place.  It makes Ian’s ideological weapons laboratory on Tenterden look civilized.  Ultima Terra is an idealized totalitarian society.  If you’ve read these words, you’re probably already marked for imprisonment and reprogramming if you set foot in the place.

On the other hand…we dare you.  We double dog dare you.

The main residence of Emperor Lucius and allegedly the heart of his power is located on the 33rd parallel in the former republic of Texas in Malus Palace. Home to wonderous strange trees, magical bees and other anomalies. The palace had a light raid on it during a spur attack by the Corwinites at the Battle of Galveston. 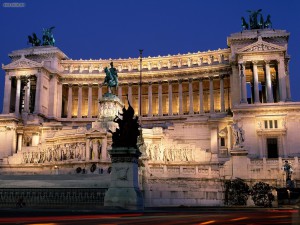 Malus Palace grand entry with the equestrian statue of HIM Lucius