Imogen stands about 5’8″ tall and weighs around 125 lbs. Slender build, long blonde hair, blue eyes. She looks to be in her mid to late 20’s but is older than that. Imogen has been known to wear a white blouse under a gold trimmed black vest and black, gold trimmed, tightly fitting breeches tucked into black leather, knee-high boots. She has been known to wield an axe in battle. She is always dressed for the occasion.

Imogen’s Symbol: a golden falcon on a black field. 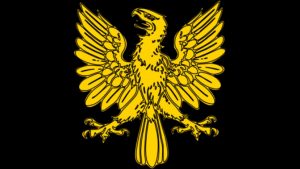 Imogen is student of both the mystic arts and melee combat. Imogen was born in Parys, the daughter of Aleksandr and one of his mistresses (Diana, the Baroness of Dinard in Bretagne. It is rumored that the House of Dinard is a distant offshoot of House Hendrake). Aleksandr, once he became aware of Imogen, brought her to Nepal in Greater Pacifica where she studied under her older half-siblings. She prefers to hang out in Port Aleksandr, a great trading city/port/realm when in Greater Pacifica.