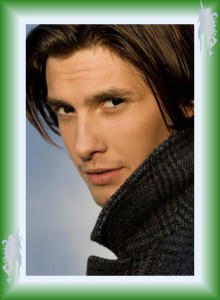 Blaine looks to be in his late twenties, and bears a strong resemblance to his brother Soren: obviously identical, rather than fraternal twins. He is taller than his father, standing around 6’1″, although he’s more heavily built than his brother and obviously has the physique of a soldier. His hair is dark, with tints of red, worn longer than regulation, and he is clean shaven, with just a trace of five-o’clock shadow. He shares the same dark blue – almost black – eyes as Soren, but he comes across as more intense and less laid back.
He is pictured looking back at the artist over his shoulder, and over the collar of a tweed jacket, with something of an air of ‘do I really need to be here’. He wears dark, almost military cut trousers and solid army boots.

Blaine is the young of Wolf’s twin sons by Katharine Heisel. He was born in Germania, and lived there for his formative years, raised in the Lebensborn system. However, he eventually spent a period of fast time with his father and Katharine Heisel. He didn’t learn that she was his mother, until somewhat later.

Whereas Soren grew up with an academic bent, Blaine was the much more physical of the two. He was also much more drawn to the German side of his heritage, probably as a result of longer exposure to Germania. He went to university in Munich, graduating with a degree in Military History and War Studies, and then followed his brother Armand into the Waffen-SS. More recently, he has walked the Pattern, and is currently working on a military project for King Bleys.

Of his family, apart from Soren, he is closest to his uncle Artur, who trained and mentored him in both sorcery and ritual magic.

None at this time