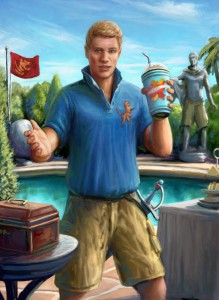 The 26 constituents of member kingdoms of E1 or Antilla ratified the decision to recognize their High King, Matthew Channicut Brandenberg as the Emperor of the Antillan Lands. This brand new political unit has its new capital at Antilla Station, across the divide to Port Matthew in Antilla Island, E1.

At the site of the brand new Government House skyscraper, The Matthew was  interviewed by Howdy Do. The blond youthful monarch is wearing his classic deck shoes, blue polo shirt and khaki cargo shorts. His emblematic tiger logo is proudly visible.

Howdy Do – Congratulations Your Majesty, on the additional title of Imperial Majesty. Why the new title?

Matthew – It is a minor legal and political matter. The lands of the Antilla Railway needed a political jurisdiction as did Antilla Station and other major cities in shadow.

HD – Some say it is because your older brother Lucius has been lording over his Imperial title as Emperor of Ultima Terra and his recent Imperial growth in the Iron Apple region.

Matthew – (laughs) That is rather silly. Lucius has been Emperor of Ultima Terra for quite a while. Besides all shadow monarchies are viewed the same way by the Swayville and Bleys protocols.

Matthew – I do not keep track but I am younger than Lucius (Grin) and probably Geran. But I do use Ancient Earth’s scale as an arbitrary measurement.

HD – Your detractors write you off as a smug arrogant preppy frat boy who has no substance. Even your trump by Dworkin is so boring that no one steals it from Amber Castle Library. How do you respond to being so mundane?

In UT, I am the epitome of corruption and liberal ideas. My desire for economic liberty is denounced as fat cat protection and crony capitalism, yet my own support of limited social programs gets me denounced by the right for not being laissez faire enough. I decided since I cannot win, I will just do things my way. If there are those who condemn, then they are welcome to go to some hole and keep hiding from Geran as they richly deserve to do so.

Matthew – When its former ruler condemned me in the same boat as Geran, I guess I should look to supporting Geran’s successful outcome in Eregnor.

HD – How do answer critics about the actions that the Antilla Railway has done in some shadows? They compare you to Leopold of Belgium.

Matthew – Same tired old story. Come and see how Earth’s overpopulation and those of similar earths have produced colonization. Not by the expensive and technologically limited method of space but rather through dimension. We are having a new colonial age of expansion. New cities, roads, mines, farms and the factories have become reality. These new settlements in the shadows of the railway have become the pathway for technology, progress and can ignite a new Golden Age.

HD – Does the ends justify the means? Geran, Lucius and your father act that way.

Matthew – Madness is hereditary? (laugh) While I do not believe in the degree and depth of actions by others. I can say – like a former Canadian Prime Minister said when asked about taking action if it will upset “Bleeding Hearts” he said that they can just keep bleeding. And he added when asked if he would move troops, he said ‘Just watch me’

HD – What are the rumours of the railway going to a technology friendly site near Asgard.

Matthew – We are starting negotiation. If successful there will be an announcement.

HD – How has the Antilla Railway made Port Antilla?

Matthew – Look at the flocks of the once endangered bird – the building cranes here. The scope size and scale has blown me away. Antilla Station is designed to be a Creation Class City. A great modern hub that proudly brandishes the beacons of order, liberty and prosperity. This hub of a growing star shape of different railway hubs allows travellers, goods and products to cross from places as far away as Parys, Lambeth, Nod, Other World Empire, UT and many other locations.

HD – How has the recent decision by UT to ban all domestic humans from leaving UT hurt business on the railway.

Matthew – The passenger service has been naturally cut to UT to reflect this. However cargo shipments still proceed merrily unstopped. I cannot comment here about UT domestic policies.

Matthew – I am not going to waste everyone’s time by criticizing my brother’s government. He and the universes know my position and his. We can stay friends and disagree. I disagree with Geran and others siblings over policy as well.

HD – Do you fear economic reprisals? UT is becoming an autarchy. Banking regulations and trade policies in Antilla and now newly annexed Laurentia are already difficult.

Matthew – (Sigh) Antilla’s trade network is very strong and does not depend on any one member of the railway collaboration service. I am focusing on building myself and my own territories as well as trade agreements. I am not working on making trouble in my neighbour’s backyards.

HD – Which would you prefer to attend as a student? The Helgram Academy? The Imperial High Blood Academy of UT, the new Bastion Military Academy that you setting up in Antilla Station?

Matthew – I prefer my own educational method. Having Dworkin as a tutor and professor gives one a better than average set of academic credibility. However as I am not going to be in the field much, I would prefer the laid back Arcadian style of the Helgram Academy in Helgramways.

I have begun the Bastion Military Academy in Antilla Station as I quickly realized that my armies in the Empire needed a supply of patriotic officers who can think for themselves yet believe in tradition, monarchy and liberty. I called in a favour from Benedict and had him sit with Dworkin and work out the details. I wanted them to be gentlemen first to other opposing gentlemen yet barbarians to those who need barbaric methods. Every enemy is different. I want them to make sure that they know how to eat properly yet be able to command a last stand or a glorious victory.”

HD – Sounds more like a snobby fraternity with guns?

Matthew (Shrug) Every army wants the right officers and the right polices. I want to have an army that can work in different technologies, have order and reasonable discipline but also bring in the values of being a gentleman. I would favour Churchill’s Sandhurst over Prussian methods.

HD – How has Antilla recovered from the devastating battle against the Corey fleet and the surprise attack.

Matthew – We took a hit, took a couple steps back. Rebuilt. (shrug) However I now have more carriers than I did before the attack. The early Corwin War builds came through with many new carriers off the assembly line. We liberated New Helgramways and are building a railway to it to ensure trade and prosperity.

HD – Any plans for a naval academy?

Matthew – Not at this time. We are still provided for by the Antilla Earth academies for now. We need to build the main port of Antilla Station first.

Matthew – Want one? (points to a nearby slurpee machine)

HD – King Swayville finds them obnoxious. He banned them from his Imperial Court and shorts too.

Matthew – King Swayville is obnoxious when he does stupid laws like that. Bad laws make honest men into criminals.

HD – Is it true that you worked with Chaos Dukes and Mercantile Lords to thwart the Chaos Monarch’s attempts to raise duties.

Matthew – Duties like taxes need to be approved by the Imperial Chaos Parliament. The Chaos Rim Dukes, Grand Dukes and Lords have many legitimate issues should a Parliament be called.

Matthew – If the Grand Duchies of Helgramways and Channicutways and their Grand Dukes choose to secede, that is an internal matter and I caution King Swayville to agree with me on this matter.

HD – Would you recognize them?

Matthew – If asked to by their Grand Dukes, yes I would.

HD – What about recent persecutions of individual Chaos Lords by the central government ?

Matthew – I find such suppression of free speech repulsive. While Swayville denies this, I am certain the wicked old man has been actively organizing retribution on those who seek freedom and economic liberty.

HD – What is the “in” colour of polo shirts?

Matthew – I am favouring navy over royal blue of last year. Probably less stripes. Maybe less red, Geran said it made me look like a tomato.