This places him as a great-nephew of the odd but powerful Benedict who destroyed most of Jesbyways in revenge for the death of Karl’s father, Lucian. As well, he is a half brother, though younger to Brand, Bleys and Fiona though not in the Amber line of succession. 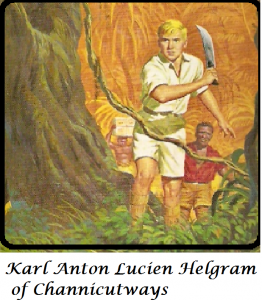 Karl was encouraged by his ‘nephew’ Lucius and allegedly also by the ghost of his father, Lucian of Channicut to spend 8 years in the Imperial High Blood Academy. Prior to that, Karl was in the University system in one Earth that has a technology of 1996.

Not much has been disclosed about this prince other than he was in UT inner worlds and caused a bit of a raucous when he was dabbling in Prince Glen’s Superhero Universe 616. He was suspected of being involved with developing a rocket program for Lucius as well.

Lately he has become more known when he was organizing the occupation as joint Governor of Mandor’s Strategic Fortress between Gregor’s territory of Jutta/Octopolis and the outer boundaries of UT. Answering to a Committee of Jericho’s son Sheridan, Lucius and Thrawn, Karl has been active in rebuilding the holding the fortress despite Mandor’s opposition.

There are some wags and religious nutters who like to claim Karl, like Arthur the Bear is a Polar Bear, too. However the most orthodox of the Bear Cults do not accept that saying that 4 is the perfect number of Bears. They are willing to call Karl a “Lesser Bear”.

More about Karl’s background has become apparent – He has been known to have attended Harvard at the same time for an MBA program as Gwen had done. They had known each other and rumour has it Karl had run-ins with different secret societies in that world.

Karl has been reputed to be taking magical lessons from Aetius and learning much of the different continuum outside of the Multiverse of Solstice. He has been on a number of explorations and military campaigns with Aetius and the Twins (Phillip and Alexander). Karl surprisingly has maintained decent terms with everyone in the younger family and has few enemies among his peers.