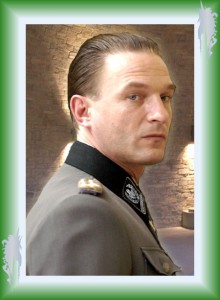 Dieter is a man of two faces: the more youthful appearance he wears when with his family, which heightens his resemblance to his brothers Dalt and Geran; and the older, “wiser” Dieter who is Führer of Germania, as well as general commanding the Ahnenerbe Forschungs und Lehrgemeinschaft on Tenterden. Which one is real, and which one is a product of either magic or possibly shape shifting, isn’t entirely clear.

He stands around 6’1″ or 6’2″, with blond hair (which his detractors say is dyed from the reddish shade of his father, Brand), thinning slightly at the temples; slate grey eyes; and somewhat hard Germanic features. He is solidly built, and has a relatively fair complexion.

In the images of him which show his older look, he comes across as being in his early-forties. His hair is slicked back, which makes it seem darker than blond, and gives him a more severe appearance. In these, he is pictured in what looks to be a stone-built crypt with a vaulted ceiling lit strategically by fixtures set into the wall. He is wearing the feldgrau of an SS officer (although the rank insignia do not appear to conform to historical precedent), complete with officer’s sword on his left hip, and Ehrendolch on his right.

Not a great deal is known about Dieter’s early history. That he is one of triplets is a matter of record, but he has been active for far longer than his brothers, with definite knowledge of him among certain family members going back over seventy years, and anecdotal evidence putting that well over a century. The date of his birth is somewhat confused, depending on which world you are referring to. For Ancient Earth (AKA Corwin’s Earth), it is around 1941. On Tenterden, home world of Ian Hawke, however, the official date is 1889. And which, if either, was his actual place of birth is still unclear. Rumours suggest that he was adopted into a Junker family, possibly on Tenterden, to keep him safe from Eric and Caine when they were doing their best to wipe out young redheads (although whether by Brand or, possibly, Bleys is unclear), and he therefore grew up as German nobility.

He has certainly spent a great deal of time on Tenterden. However, he is also believed to have been one of the driving influences behind Hitler on Ancient Earth, where he acted as the Führer’s Chief Magister, Rot Adler. After Hitler’s fall on that world, he established himself as a West German industrialist, for those times he wished to operate on that world.

Evidence found in the Wewelsburg on Ancient Earth suggests that he has regularly travelled between at least thirteen different worlds. On multiple of these, he has founded the Thule Gesellschaft in or around 1918, and he is often a prime mover in the development of the Nationalsozialistische Deutsche Arbeiter Partei. However, managing to direct those worlds so that his pet project has had lasting success has been less successful. Tenterden is one of the more enduring iterations of his beliefs. However, they appear to be most fully realised on his personal Shadow of Germania.

Along with Dalt, he was recently accorded recognition as a Prince of Amber by the newly-proclaimed King Bleys, although rumour has it that Regent Gérard would have preferred to have him arrested than acknowledged. He does not have quarters in Amber Castle as yet, but he does maintain a residence in Southern Amber.

Outside of Amber, he holds the title of Führer of Germania, is the Oberstgruppenführer commanding the Ahnenerbe on Tenterden, and has held a variety of other military ranks of similar ilk.

He is without a doubt a Pattern initiate, as he has been seen on multiple worlds, including Amber, and has been known to use the Pattern when working magic. He has an extensive cross-Shadow network of agents and that he has conducted various experiments on a number of worlds.

He is also a ritual magician of darker hue, with considerable skill across multiple disciplines, and a preference for the ceremonies of the Thule Gesellschaft. He has been known to engage in hugely ambitious ritual projects, although these are not always successful. He is a firm subscriber to the common Amberite belief that Shadow dwellers (and some family members, notably Random) are Untermensch, and therefore can justifiably be used as a resource for the furtherance of his personal power. There is some evidence to suggest that he is also a standard sorcerer.

In addition, he is something of an expert on genetics, including Family genetics, and has been running a eugenics programme involving Family members across multiple Shadows.

Dieter is the son of Brand of Amber and Dybele Hendrake, and is one of triplets with Geran and Dalt. He is not well liked by his stepmother, Jasra, in large part because he and his father are well aligned in their darker attitudes and methods, and efforts he has made to establish agents in Brandenburg have been enthusiastically countered by her.

Dieter is known to have had a daughter named Greta, who was born on the world of Tenterden in 1912. She married Dietrich von Ansbach, and had two sons, Alfred von Ansbach and Wolf Ulrich, although it later became apparent that the boys did not share a father. Alfred is married with a boy and a girl and living on Tenterden, having inherited his father’s title on his death. Wolf is unmarried, but has contributed at least three offspring to Dieter’s “abern” project, including Armand Becker and Thorsten Ritter, a protégé of Dieter’s from Germania. Greta, herself, died in 1950, in mysterious circumstances. Her husband was murdered some years later.

Recent information from Germania also indicates that he has a younger daughter, the journalist Marina Acker, who is the only current known lover of Ian Hawke, and the mother of Artur Acker. However, given Dieter’s love of bloodlines, and the SS worldview that the Aryan race should be promoted, it is reasonable to assume that he has other children, who have not been identified as yet.

With regard to relations with others of his generation, it is well known that he has a long-standing rivalry with Ian Hawke, although the nature of this appears to have changed recently, from active hostility to mutual respect. Reports also suggest that Dieter is close with his brother Dalt, and is working on forming stronger ties with Geran.