Modern contemporary polytheistic Egypt, in a Rock between Amber and Chaos past the Earth Zone on the Chaos side. The north is full of red haired swarthy people and the south with black haired faired skinned people both with green eyes. Twenty-seven prefectures ruled by military governors in addition to many external territories.

Gaston – Current God King and Pharaoh of Aegyptus Modernus Son of Nicolas De Corey and fighting with Guy and Co. / Also fighting with Aleksandr AND with Christophe!
-Claims Taygete as his Queen and tries to take the Lady in Red

The Most High / Serpent Queen /Wadjet – Presumed to be Taygete

General Dubois – Former high governor of Pi-Seti Prefecture and local boss – was after Darrien Gautier and Taygete. Boyfriend of Desmoralda. Deceased. When he started losing she sacrificed him to protect the palace

“Sally” Desmoralda Fitzjesby and Archdemoness – mistress to General Dubois, Destroyed by Avon and Taygete and Brit and Fabian and Dave

Lady in Red – Pretty woman who is mistress and accomplice to Darrien Rival to Desmoralda. Was severely injured by Fabian’s stilleto. Name and heritage not known, probably high blood to have survived Fabian’s severe injury. Very good at hiding magic items in her clothing.

Darrien Gautier – Indiana Jones type who is accused of being paid by Jurt on behalf of UT and Dara to loot the treasurers of Aegyptus Modernus
Also researching old Valentinian war base and special arms research facility hidden in A.M. Was severely injured by Fabian’s stiletto – calls himself a golden knight but the joke is because he is good at taking payoffs – Public Enemy Number One Still bounty of 50,000 Kronkites for his capture.

Avon – Owner of the Holland Trading Consortium (many names) – feud with Gaston over Gaston’s torture of his company workers and the UT style seizure of property – Bounty of 49,888 Kronkites for capture, 23 mistress, a title, 4 estates, and the sacred right sandal of the God Ra for his capture.

Nassir – Military leader of the Marya – good natured, loves dance music and dancing but is totally loyal to the worship of the Serpent Queen and the removal of Gaston from their lands

Kai, like Bertie is believed by a number of cultists, special interest groups, conspiracy theorists, social justice warriors and some pundits to be a possible Winged/Feathered Serpent. That said, he, unlike Bertie, has not been involved in Aegyptus Modernus to date.

Jacque – Son of Aleksandr of Parys – Sought by Gaston as a special captive and his cousin by Aleksandr – currently in sea battles with his land of Margueritaville and Aegyptus Modernus. has some small carrier raids against Red Sea ports of Aegyptus Modernus – Bounty for Capture 49,999 Kronkites and a title and three estates and ten mistresses.

Claude – morose dirty blond haired cleric pre-Quadity with a black fedora. Was Corwin’s private secretary and confessor in the First Monarchy of Parys – was spiritual teacher to Michel and shares their guilt – is in Aegyptus seeking forgiveness from sin and working on the Osiris mysteries.

Pi-Seti Prefecture – The northern most province or prefecture of Aegyptus Modernus – everything destroyed post crusade styles 20 miles from the coast. Capital is PiSeti. Contains ruins of an Alexandria (Great Golden City) built by Cornelius the Younger as a gift to the Goddess of Aegyptus Modernus for her help in keeping the young man from his grandfather’s never ending wars of conquest

Hotel Rameses II – Best hotel in Pi-Seti though no hot tub! Was scene of a very messy fight with Dave and friends with General Dubois’ men.

Camp of the Marya – Located outside and hidden by their divine blessings from the Serpent Queen (unconsciously through their prayers and song and of course, dance)

Ptolemaic Aegyptus – lost trading partner of this Aegyptus – reputedly ruled by Oberon who married 3-4 daughters of King Alutes in days long past. Presumed lost but also had a heritage of the Abyss Empire

Holland Trading Consortium – Was the main trading company with Aegyptus Modernus . The Factor in Pi Seti was arrested and tortured and Avon’s property seized throughout Aegyptus Modernus causing a big feud with the two. Avon stormed his own factory (old term for warehouse/trade centre) and took back some of his stuff and released prisoners. Was accused of working for Jurt, Dara, Lucius and Darrien Gautier. Pi Seti location on “Horus Boulevard of Mercy”

The Maya/Marya/Mara – Resistance to Gaston and various other evil doers. Loyal but practical followers of the Serpent Queen 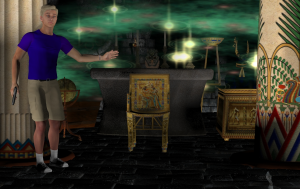