They emerged from the darkness, the armored plates of their Carapace armor hidden by the flowing scraps of shroud that covered each figure. With each visor glowing a dull green from the HUD images within, it would be understandable if an observer assumed that the armored men and women were demons or some form of bipedal insects.

Each held a weapon. Scoped battle rifles, their slender barrels covered by the same gossamer sheets of the shadowed cloth, were carried at the ready. Bandoliers of ammunition, grenades, and heavy bladed knives circled each waist.

They walked forward, seemingly oblivious to the other soldiers who watched them. Each figure stood easily a head taller than the observers, and the equipment they carried would have brought the others to their knees. A single marking was embossed on their right shoulder pauldron – a catlike skull with bared teeth. They passed through the gates, weaving their way between the heavy blockades and out into the silent streets beyond. 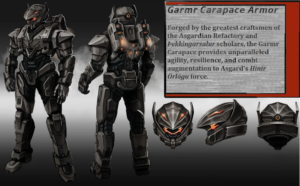 Prioritized and advanced in parallel to the Hinir Örlögu Program, the Garmr Carapace Armor is currently the most advanced piece of tactical military hardware in Asgardian human hands. Each suit alone costs as much as a main battle tank system. Created by the Asgardian Þekkingarsalur research center, the Garmr Carapace is a powered exoskeleton capable of taking full advantage of the physical capabilities of a Hinir Örlögu-I supersoldier. The battlesuit is constructed in overlapping layers. It is a sealed system, capable of extravehicular and submersible activity or operations in toxic atmosphere. It is hardened against EMP and radiation, and has filters that are completely effective at removing toxins and bacteria from the local atmosphere.

The armor’s outer shell is composed of a multilayer alloy of remarkable strength and has been augmented with a refractive coating capable of dispersing a limited amount of energy weapon strikes. The suit contains a gel-filled layer underneath a thick black armored bodysuit. The gel layer regulates temperature and can re-actively change its density. The inner skinsuit is made of a moisture-absorbing synthetic material linked to an environment control computer and the occupant’s neural interface.

Each Hinir Örlögu-I supersoldier has a molecular fiber network called the nervous system within their brain. An upgrade to the standard neural interface is issued to all members of the program. This network translates electrochemical signals to digital code and routes them through an interface connection at the rear of the skull. Through this interface, the user’s thoughts command the armor’s movement and weapons; and input from the on-board sensors comes directly to the user’s mind. The kinesis between machine and mind is so fast that it is almost impossible to chart reaction time.

Between the external armor and the internal padding is the most devastating weapon the suit carries: a layer of reactive metal liquid crystal. Woven by molecular tools into a superdense optical computer memory, this revolutionary crystalline layer forms a network, capable of supporting the kinds of artificial intelligence usually reserved for starships, as a type of piggyback system. An A.I.’s personality and processing matrix can be carried by the armor and delivered to the suit via on-board storage in a crystal data chip no larger than a personal credit card. At the same time it is amorphous, yet amplifies force, doubling lifting capability and improving reaction time by a factor of five.[2] Unfortunately the system is so reactive that normal human beings cannot use the suit without injuring themselves.  Only personnel who have carbide ceramic ossification, a skeletal augmentation, such as a Hinir Örlögu-I, can safely wear the suit.

The suit also possesses other features that enhance its wearer’s abilities. It has numerous clips, belts, and magnetic holsters for the attachment of additional weapons and ammunition; an advanced Heads-Up-Display(HUD) linked to sensors in the gloves detects the type of weapon and devices held, and to project shield strength, ammunition count, a targeting reticle, waypoints, a radio uplink for communication, health monitoring and other helpful data.

In its final phase the Garmr Carapace battlesuit weighs half a ton, or 1000 lbs when in use, and is a fully neural-linked system. With an on-board AI using the human mind for parallel processing, the Hinir Örlögu-I/Garmr Carapace combination is designed to be the most devastating intelligence tool ever created.