Jhennifer stands about 5’10” tall and weighs around 135 lbs. Long, silky, silver hair, blue eyes. Although much older, she looks to be in 20’s-30’s. Jhennifer normally wears a white cotton blouse a size or two too big for her under a fur trimmed, sleeveless brown leather doublet with dark blue tightly fitting breeches tucked into brown, soft leather knee-high boots. A dark grey leather weapons belt/harness with a silver buckle supports a large pouch on her left and a dagger on her right. She wears an intricately worked silver bracer is upon her left arm, and a bone choker style necklace around her throat. A black leather quiver is on her right shoulder with a longbow in her hand or attached to the quiver.

Jhennifer’s Symbol: a silver harp between the horns of a silver crescent moon surrounded by a circle of stars on a deep blue field. 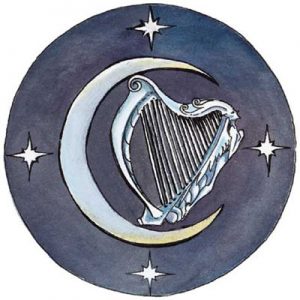 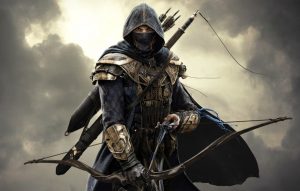 Jhennifer, or Jhenn to those who know her, is Aleksandr’s oldest daughter born in the Trading Zone. She is a skilled mage, fighter, and her younger brother, Duncan, assists her in dealing with the day to day operations of Port Aleksandr.

Port Aleksandr is a modern megacity with railways, wet water ports, airports, heliports, and starports. Cross Taiwan with Hong Kong, Tokyo, Sydney, Bombay and you sort of get the idea. There are temples to every conceivable religion, libraries and museums, banks, a stock exchange. Bars by the thousands. It exists to serve as a gateway from inner Greater Pacifica to the greater Solstice Shadows/realms.

The flag of Port Aleksandr