The Triskelion complex is located at the opposite vertex of the creational diamond to Asgard. Not a great deal is known about it, except that it appears that you need to reach it via land, sea or air through specific stations for the purpose. It appears to be a power where the four elements are wound together much more tightly than is the case with most of the other great powers, which have separate, individual Patterns or equivalent for each  element. 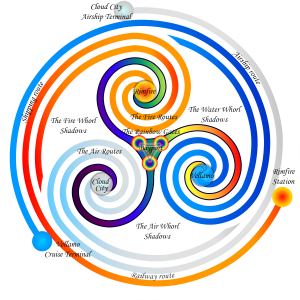 In the beginning was the Void. The great Nothingness. Then in the Void grew Rocks of Stability, six and twenty in number. And from these Rocks, a great empire was born: the Empire of the Abyss. The Empire grew, and great rulers arose, until the Great Lord Cornelius did summon many of those Rocks together, and form Substance. And from the interactions of Substance was Created Shadow.

Of the Rocks that formed the heart of Substance, Six Great Worlds were the foundations of the structure from which all others depend, binding them together in a great Continuum. With the passing of time, Great Powers were Created upon the five of the Six Great Worlds. First was the World of the Serpent. Then, the Land of the Unicorn. Then, the Realm of the Phoenix, followed by the World of the Silver Rose. And finally, the Land of the Great Tree.

But of the Sixth World, no more was heard, and its existence fell out of memory. For Millennia uncounted, it remained alone, shining in the Darkness, unnoticed by all. It followed its own course and waited, until such time as One would come to help it take its place among the other Five.

And finally, there came to that World, Children of the Race of the Creators. They came to bear witness to its presence, and in them was Life and Light. Light enough to bring the Lost World to its true place within Substance. Of these Children were there Four and Two. One Child spoke for each element of the universe, while Two brought the Power to Bind.

With them they brought the elemental lands cast adrift by the laws of Substance, and the Child of Earth set foot upon the Sixth World, and did inscribe the central Power which would bind the elemental lands together. And thus was the Confederation of Four bound together in One. And the Sixth World achieved the potential it had been given at the dawn of Substance, and took its place within the Network of Great Worlds, bringing balance and stability to the Worlds of Substance.