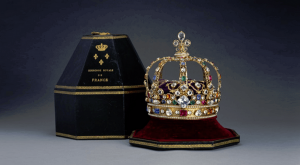 The Parys Crown itself is a collection of powerful magical stones and jewels.

Christophe did not make huge enquiries in its powers and is said to have only to have worn it once.

Legend has it, the original Diadem portion of the Crown was from Marcellinus and the Karm monarchs. It later was used (allegedly) as one of the diadems of the  House of Karm according to legend, Deirdre chatter and notes from Faiella.

The band or diadem possesses the power to resist Abyss effects and gives an automatic ability to determine direction relevant to the 7 ‘stars’ or rocks of the Karm Confederation, that rose up to resist Justin the Stern. Apparently early Karm family members were not able to shape change. The band also gives a +40 to command but only when worn on a Karm throne, not a chair,  or riding a Karm black horse in battle. (Karm horses were allegedly slaughtered by Theodosius the Clever, Justin’s son). The Parys Throne (the crowning one) counts)

– The three diamonds of the top Fleur de Lys form a set. The top one bestows an ability to detect direct lies (but not half-truths) in all but the highest psyches. The second allows for documents to reveal hidden inks or Trumps inside the document before a Trump trap would work. The third allows the King to add D10 X 10 years of natural life to a mortal.

The diamond in the front is actually a low grade Silmaril made by Feanor. This detects worshippers of Sauron, and throws a painful light at followers of Ungoliant and Unlife.

The ruby in front is allegedly from the Lost Mine of Flavius in the Abyss, where Jewels of Judgement were obtained before they were charged with power. It is not a Jewel of Judgement but instead, when conjoined with the Diadem, it brings stability to the physical and metaphysical lands. Dworkin suspects this was a factor in why the tribulations of Parys did not affect Inner Parys.

There are other gems with minor powers from Avalon, Lorraine, Amber, Chaos and even some allegedly after the Corwin/Brand great chase.

Some gems, Corwin took after the death of King Eric of Amber and the crown jewels there.

Strangely there are psychic traces in some jewels of connections to Matthew, Lucius and Geran.