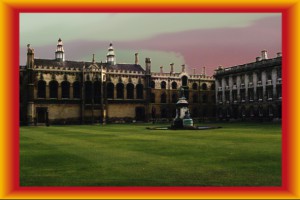 Since time immemorial, House Helgram has run its own school to train the more gifted members of the somewhat extensive House (or at least, the ones whose parents don’t send them off into Shadow) in the various skills they’ll need to survive as active members of the Courts of Chaos. And they must be doing something right, because Helgrams are now in key positions within the wider Court of King Swayville, and their influence is now extending south to the Land of the Unicorn, where Bleys, son of Clarissa Helgram, has recently become King.

Pupils join the Helgram Academy when they reach their eleventh year (often coming up from the Helgram Prep School) and, depending on their abilities and inclination, graduate any time from twenty to thirty, depending on how far they wish to take their studies. By the time they reach their mid-twenties they are usually becoming more comfortable with their abilities, and beginning to learn their responsibilities as full members of the House. They even start accompanying more senior members out on House business.

The Academy caters for both school aged and university students.

It is not affililated, in any way, with the Imperial High Blood Academy of Ultima Terra.

The Junior Academy, or Lower House

Ages 11-20. The student intake is usually 25-30 per year, including the occasional pupil from one of the other Houses, particularly Hendrake, who may also have Helgram Blood. So there are usually between 250 and 300 pupils in ‘high school’ equivalent at any given time, which allows for pretty intensive teaching.

Those who have the ability to shape shift will also be taught the basics of how to change to their four inherent forms. At about eighteen, they take their general exams, and then spend the next couple of years studying those areas which really interest them, usually taking a Major and one or two Minors. Most students finish their stint in the Lower School at the equivalent academic education level of second-year undergraduate of a Shadow university in their chosen Major, and probably first-year equivalent in their Minor.

The best students may be appointed as Head Boy, Head Girl and Prefects, by the staff and teaching assistants.

Usually ages 20-25, although particularly gifted students may complete their studies earlier. Normally, about 25% of students stay on to take their studies further – or 12-15 per year – so at any given time, there will be around 65-70 JCR students.

This is when they can begin to learn the more unusual subjects – sorcery, conjuration, ritual, Trump, etc – and if they have innate abilities, these will begin to be developed. They may also choose to complete their studies of shape shifting, to reach full basic level. Or equally, if they just wish to continue with the more standard academic subjects, they can do that as well.

They get introduced to the ways of the House in general, and its place in the Courts (and now the wider multiverse) and also begin to explore in which areas they may wish to serve the House in the future, for example admin, diplomacy, trade, military, medical, etc.

For academy or vocational subjects, by the time they reach the point where they can decide whether to remain at the academy for a further period (usually around age 25, but sometimes earlier for very gifted students), they will have reached Shadow Doctorate equivalent level in their chosen Major, and Bachelors level in their Minor/s, and should have a good grasp of what they want to do in the future (although there are always exceptions).

The JCR has a small student Council, elected by the undergraduates, of maybe half a dozen members, who look after the grievances of the students and suggest improvements or changes to the Academy Authorities.

Admission to the SCR is usually by invitation, for students who have excelled academically or in matters arcane, or have some kind of useful skill and ability which the House wishes to develop further. Candidates are chosen by the Academy Council, made up of the senior Academy staff.

The number of students chosen each year is usually in single figures, and they are the Elite of the Academy. They have the chance to travel on business with the more senior House members, or do their own research into new or unusual areas. In return, they are expected to act as teaching assistants and help the younger pupils develop.

Only 3-5 students are chosen to stay on every year, they are the Elite of the Academy. They have the chance to travel on business with the more senior House members, or do their own research into new or unusual areas. In return, they are expected to act as teaching assistants and help the younger pupils develop.

At the current time there are 23 members of the SCR. 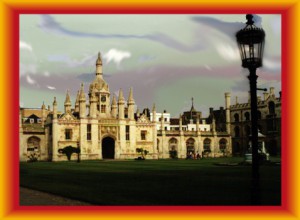 The Helgram Academy is situated within its own Ways, which can be reached from the Central Nexus of Helgram Ways. When first entering the Ways, you arrive in The Quad, an area of mixed lawns and paths with a statue of the Helgram lion in the middle, surrounded by well-appointed stone buildings. An 8ft-wide flagstone walkway goes all around the interior of the Quad. The occasional cat can be seen sunning itself on the stones.

Behind you as you come in, as if you’d just stepped through it, there is a wrought iron gateway, about twelve feet wide, also decorated with Helgram lions. This is the only break in the buildings of the Quad. Beyond it you can see countryside, but in reality it returns to the Central Nexus. The general look and feel of the place, including the climate, is of southern England or Northern France, and there is a single yellow sun in the sky.

The main building is styled after the Oxford or Cambridge colleges. Directly in front of you is the Clock Tower, which has an arch underneath it at ground level. The Quad Clock is the benchmark for time everywhere in the Ways. The rest of the building is made up of the Great Hall (in the East Wing, to your right as you come into the Quad), dormitories (for those students who board, which is c50%: the others either still live with their parents, or in one of the Pocket Ways off the Academy), the refectory, a small but well-equipped infirmary, and the classrooms, regular labs and workshops.

The arch under the clock tower leads through to the Academy gardens. You come out onto a raised terrace looking out over a formal garden, which extends roughly half a mile each direction around the Academy building, before ending in a beech hedge, about thirty feet high, beyond which look to be fields. Off to the left can be seen tennis courts, a swimming pool and a running track. The building this side is three storeys high, and seems to be of a different style of architecture to the Quad side.

The terrace runs for about a third of the length of the building, with a staircase at each end, and there is also an impressive staircase down to the Fountain Court. This is a 50ft square area, paved with multi-coloured flagstones and surrounded by a box hedge about 2ft high and 1ft wide. Seven pathways, spaced regularly around square, lead out into the gardens. Opposite the staircase, beside the hedge, is a small fountain mounted on an octagonal stone base, covered by a decorative iron gazebo, and topped with a white gemstone the size of a fist. This stone gives off a full-moon glow every night. 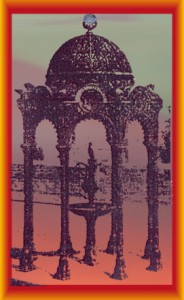 The Academy Ways is one of the more extensive sub-Ways attached to Helgramways proper, and comprises a large number of pocket Shadow, which allow the students to experience many different environments and tech levels, plus varying magic levels. These are reached from the Fountain Court.

The flagstones in the Court are of varying different shapes, sizes and colours, and depending on which single stone, of combination of stones you walk on, you can access specific areas of the Ways. One of the favourite tricks of the older students is to haze the younger ones, by giving them the wrong directions.

Because of the complexity of the Academy Ways, given the different kinds of training grounds offered for the students, there is a Wayskeeper in residence, who makes sure everything is where it should be, when it should be, and how it should be.

Details of the Academy Staff can be found here.