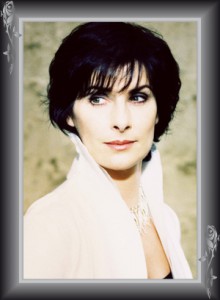 Howdy-Do – What do you consider your theme song?

HD – Such contrasts. Are you bipolar?

Riva – What sort of ZouZou are you? Why do you ask mental health questions so rudely. Have you no respect. I spent many days at the rented house in the Golden Circle comforting poor Glen who had a nervous breakdown. The stress of being a son of l’horrible Jasra and le monstre Lucius was too much for him. He missed my father and I had to pet him like  a cat to make him feel better during his dark days of sadness. Show some respect! As for me, I am completely sane but I do get a little sad from time to time when I miss my father and my beloved Bears.”

HD – Whom do you consider your greatest ally?

HD – What is your favorite color?

Riva – I can see you are definitely from a class that has no understanding of heraldry. Black is a colour of both House Jesby and House Corey.  Purple is a colour of choice of many of Corwin’s family including Prince Merlin. I can see that you are very uncouth and were born in a barn. So be it. I will try to explain using small syllables.

HD – What do you think of the St. Malo Baltic region bop pop group Bonnie Boohoo and the Beltanes? (think Bjork badly done)

Riva – (sigh) My tastes are too rarified to appreciate them. Perhaps Matthew and Lucius would enjoy their lower common denominator.

HD – What would be more suited to your tastes in music then?

HD – If money was no object (you just won the lotto) what would you buy first?

Riva – I have no shortage of resources. But I would love to buy my brothers new furniture to replace what Glen scratched up when he turned into a nasty ill-bred leopard.

HD – Does he (Glen) do that often? Like to the phases of the moon? Has he ever tried Soft Paws?

Riva – (sighs) “You have no idea what a handful my adopted brother is with his many problems. He is so jealous of Christophe because he was in a higher place in the Quadity. Plus he misses my father so badly. He cries himself to sleep so often. However Soft Paws or other improvised solutions cannot stop his nails from regrowing and then in his Leopard form, he obliterates fine furniture, ancient tapestries as easily as crepe paper. Jericho charged my poor brothers several fortunes for damages. I am glad he made Lucius’ horrible Twins pay for their share of the damages when they broke in and kidnapped Glen for their own strange and very questionable rituals.”

Riva – My father King Corwin the Great. I read his chronicles every day.

HD – Are those published works?

Riva – Both the open source and private notes. I am privileged to rediscover what a great man Corwin was before his problems. I can see how noble he is and how wicked Brandenberg shows itself – especially the conniving sorcelle Jasra and the brute and war criminal Geran.

HD – Are you allergic to feathers?

Riva – No but I think the Channicut family does. Some of the bears needed them replaced.

HD – Replaced? What is this about the Bears and feathers????? Are you about to open another La Nouvelle Justine’s?

Riva –  Non, ma ZouZou. My Bears are allergic to feather pillows. Barry and Arthur had awful rings around their eyes from feather pillows. I think it is a Channicut or Helgram affliction. With respect to Nouvelle Justine, one should consider interviewing those bizarre Twins of Lucius’

HD – What’s the true reason you’re on the outs with your brother, David, aka Dave?

Riva – David was not brought up by his father and learned to be crude and rude. He needs to go to a finer finishing school in Parys for a couple years. I think on that subject, Christophe was correct in his assessment.

Riva – Miracles never cease. Perhaps we can also get him to use a serviette or napkin as well as eat soup without sounding like the lifeguard has to drag him back from the shore.

HD – Would that mean then you still hold out some hope for him yet?

Riva – The race is on! C’est bon. Perhaps Dave and Glen can compete to acquire gentlemanly skills. I wonder what animal Dave turns into under stress. Possibly an aardvark?

HD – Is it true you secretly tried to force him to marry you, so you could use him against Christophe in Parys?

Mais non! He is my brother! I could nor would not marry David. Besides I would require a man to have table manners. He eats worse than Matthew, Lucius, Glen and Geran put together at a trough.

HD – What about Magnus? Where would you rate him? Or Tone?

Riva – Mon Dieu! Magnus is a wild man. He needs to cut son barbe horrible et terrible. C’est un barbarian tres vrai! That man also needs to fix his eye and learn to use a bed and not a pile of furs as a sleeping place. Plus there his aversion to bathing and colognes…. He has a certain air about him, mais non?”

As for Tone, he may be an old grouchy man but I can assure you that I do not date men who look like children. C’est tres estrange. I would rather have my nice Bears instead. Did I tell you Barry purrs like a cat after he falls asleep. He snores melodically like a Gregorian chanting choir.”

HD – Do you have any piercings?

Riva – Ladies do not have piercings but I think that David had a Prince Albert done.

HD – You do not have pierced ears? Many fashionable ladies do…

Riva – That is a late 20th Century popular culture trend I wish to have no part of.

HD – If you had a choice, would you rather be Queen of Parys, Amber, or Thelbane? Or none of those? Or all of those?

Riva – Let’s aim for all of them. Perhaps then Queen of Parys would be the consolation prize. There is no salic law in Parys.

HD – Surely if you are Queen you can change the law?

Riva – Laws are an interesting thing. Even Swayville of Chaos has extreme difficulty in changing any laws in Chaos without the Parliament.”

HD – What would you do about/with/for St. Malo, if Dave left and you could have it back?

Riva – I would probably hire my brothers who would catch Glen and make him, by ritual, undo all his wicked damage and redeem his sins.

HD – What about the one that brought in the meteorite?

Riva – I think the liberated people of St. Malo can think of many interesting suggestions….

I am a Chanel and Dior girl.

Riva – Neither, I prefer French blends of tea with bergamot

HD – Which blends? Bag or loose or ball?

Riva – The Ball seems the best for me. I have nice large ones that are porous and rather effective.

HD – Whom do you consider your worst enemy? Why?

Riva – Lucius who froze me and used me as a coffee table, then he put his dirty feet on me. Worst of all he ate with his knife in his left hand like an… American!

Riva – Only by accident. He does drink too much wine and Captain Morgan rum. But yes, I was used as the Imperial Centre main table by that lout Lucius.

HD – If you could get a tattoo that would remain, what would you have done and where?

Riva – I am not a sailor. Corwin only says men at sea get tattoos. I think Glen has one. Some silly sappy stuff about love on his upper thigh.

HD – So would you marry a man with a tattoo?

Riva – I am certain it will heal with time.

Riva – Absolutely not. He is a bosch type. That is more for Geran and Dieter and Ian’s children.

HD – So what is more your type?

Riva – You poor dear, you are hearing impaired as well. Sans Blague, I will repeat – Chanel and Dior s’il vous ecoute

Riva – Only on occasions – Pierre and Jacques say that it helps with the rituals that had with Glen and Lucius in the past. Drinking it makes putting up with them so much easier.

HD – With your recent fireside chat, are you trying to emulate Queen Regent Jasra or Grand Duchess Dara? Or both?

HD – Will you be doing more Fireside Chats?

HD – Is it true the real reason you want to marry Barry Bear is so you can keep him tied to the bedpost and rent him out for rituals?

Riva – Barry loves me a great deal. He has many problems and only I can help him overcome that. I would never rent out my brown bear for rituals. Perhaps Glen easily I would rent out but never my little Bruin.

HD – How do you know so? Has he proposed?

Riva – I am a smart girl. I can read the signs. He feels guilty because of some nonsense of a vow of chastity. After we marry, he can write himself an exemption with his religion in UT. Lucius possibly would want me to marry Arthur but he likes his women blonde.

Riva – I am a beautiful French Walnut tree.

Riva – Because I am beautiful, Corey Francais and Walnuts are both productive and make a lovely oil.

*True question asked by Barbara Walters, it was one of the most controversial ones she ever tossed out in an interview. Was she brilliant or did she come across as dingahoy. I do remember the person not stumbling much in the replying to that.*