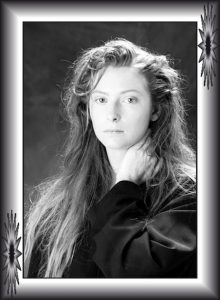 Myfanwy is the only daughter of Oberon and Cymnea.

She holds the titles of Princess of Amber, and Regent of the Cybellelands in the Abyss

Myfanwy is, as someone pleasantly put it, ‘as old as dirt’. She grew up with her elder brothers Finndo, Osric, Lucien, Mattias and Benedict. Since the deaths of her eldest brothers she has remained closest to Benedict. Myfanwy was retained by Oberon after his divorce from Cymnea and used as marriage bait for his machinations around Creation. However as she could not be married without the combined agreement of Oberon, Cymnea and Swayville she remained singularly unattached. She flitted between Thelbane and her Mother’s Abyss Kingdom and occasionally, as ordered, back into Amber. She learned fighting and Strategy from Finndo and later Benedict as well as from both the Hendrakes and the Hellmaids.

Her relationship with her Stepmothers, as they came and went was poor until the time of Paulette and she was out of Amber far more than within. That with her Father, was varied. She was accused of having poisoned Faiella and made no secret of her loathing of Rilga. She was responsible for the killing of any of House Karm that remained in Thelbane. She worked hard at various time to protect Amber and was a member of the Cabal along with Obie, Gaius and Isaac to protect citizens during the burning times and later took the War into Eastern and Northern Amber earning a reputation for ruthlessness as well as being a vicious opponent and formidable strategist.  That War was said to have damaged her significantly. She was again recalled to the Abyss to act as Regent for her Mother and learned something other than Warfare. She fought for Amber during the subsequent Wars and worked directly under the Orders of Oberon and Benedict against Eric, Caine and Julian and for Amber during the Black Road incursion and the Battle of the Abyss. Any moves made against her for her actions during Wartime were blocked by Benedict and she was included in the pardon issued by King Bleys.

Appearance: She is tall – around 5′ 10″ with large, bright Green eyes and long hair of palest blonde and a fair complexion.

Colours: Her favoured colours are red and gold.

She is extraordinarily graceful in her movements. She flows and this is evident in her fighting and dancing. She has developed a faintly amused attitude towards her numerous younger brothers and sisters and their offspring.  Was known for her dislike of Darlene but that seems to be a truce in place. Dislikes Dara – for reasons that are not entirely clear.

Myfanwy is known to have a penchant for jewelry, specifically emeralds and diamonds.

She still keeps her chambers in the old wing of Amber Castles but her main residence is Dunluce Castle.

She is known to be the lover of King Jarngrimr of Asgard.