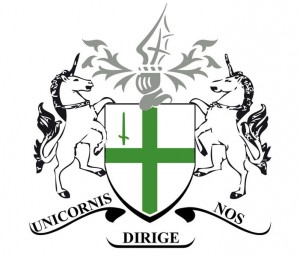 The “Official” locales within the city are outlined here. 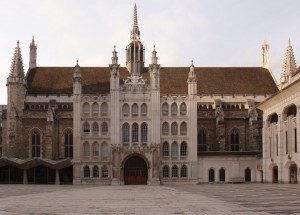 The Amber Guildhall is the historic heart of the administration and government of the City of Amber, although its role was significantly downgraded during the reign of King Eric. With the Regency, however, it has been restored to its former glory as part of the many renovations around the city.

Under the previous Lord Mayor, and maintained by the current incumbent, Artur Acker, it has once again become the centre of the City government, and is open to all the people of Amber. The building is guarded by members of the Amber City Militia in ceremonial dress.

The Guildhall itself is an imposing stone edifice, with architecture dating from a number of periods. The original building – which nowadays largely comprises the Great Hall – is almost six hundred years old, and was built at the north side of a large courtyard, in which open civic events are held. A stately oak has recently been planted (although it looks much, much older) in once corner of the courtyard. 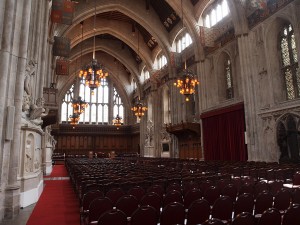 In the intervening years, this older building has been added to and extended, as the City has grown, and two newer wings have been built to the east and west sides of the courtyard, with the eastern one including a small public art gallery and library.

The interior is mainly dressed stone in the public areas, with wooden floors and ceilings, while offices are more likely to be wood paneled. A beautifully illuminated copy of the Charter of the City of Amber, as granted by King Oberon, is displayed in the main entrance hall, where all Amber citizens can see it. 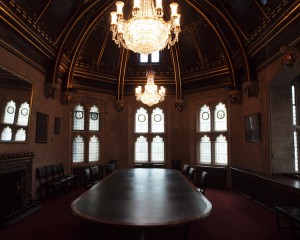 The Great Hall is where the full City Council, and and the Council of Guilds hold their regular meetings. It is also used for major City events, such as banquets and galas. The banners of each of the Guilds are displayed inside the Great Hall.

The Cabinet Room is on the first floor, and is reached via the stairs in the main entrance hall. This is where the regular meetings of the Mayor’s cabinet – made up of three senior Amber City noblemen, the heads of City Judiciary and Militias, and a number of other key advisers, the are held.

Not as Gothic as one would expect.[Yes Craig approved, if you think it should be something else, ask him before changing the picture, thanks!]This is when it’s fully up to snuff, no scorches or damage. It needs a bit of a scrub and a little plaster and bricks tucked off again at the moment.With a couple of upcoming royal weddings, you bet it is wearing scaffolding and being fixed up again after a few protest lobs and that great fat midget oaf Random messed it up a bit with his pretend over being handed the Crown. [Shame on you Maud](instead of the cross on the top it has a unicorn rampart, gilded)The faithful of the Unicorn can attend services here. If there is not room, and oftentimes there isn’t the big front doors are left wide open and the congregation can spill down the steps and into the paved courtyard and roadway to the right.Hay and muffin offerings to the Unicorn may be left near the doorway to either side of the main stairs, and will be collected by the Cathedral staff.

Halfway between the Guildhall and Concourse in Uptown, and Downtown, is the main Constabulary HQ. For a brief period, when Prince Jericho had the command of them, the Constabulary were moved elsewhere in the City. However, since Lord Mayor Ian came into office, and appointed Captain Geoffrey Ellis as the combined Militia/Constabulary commanding officer, the old HQ has come back into use. This has involved a certain amount of restoration and maintenance.

More than just a police station, it also has barracks for Constables, City Militiamen, storage for armory and equipment and staging areas for the law enforcement to go out and deal with various disasters, uprisings, riots, and damage to the city itself. It has Medieval style gates, and an inner courtyard for mustering.

Under the command of Captain Ellis, and with the full support of the Mayor, the Constabulary has become a far more trustworthy  and disciplined organisation. Disciplinary matters are initially dealt with internally, unless the offence was particularly heinous, when offending officers and constables will be handed over to the main Amber judiciary system. However, morale within the constabulary is good, and a trust is developing between the officers and men which means that such matters very rarely spill outside the walls.

Constables are issued with badges, which they are expected to carry at all times, just in case they need to step in if there are problems. However, should their badges be stolen or lost, they will automatically crumble to dust, so they can’t be used by unauthorised people.

There are Constabulary sub-stations around the City, for example the Concourse Station is the first response station for trouble in the City’s Concourse district. The Constabulary also recently set up a new sub-station in the former premises of Fox & Sons Glove Makers. 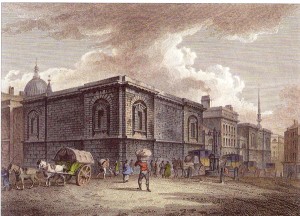 The Amber Central Gaol is in a building separate to, but close by the Constabulary HQ. It was Central Gaol was originally set up by Oberon (along with a number of sub-gaols in other places around the city, which have since fallen into disuse). It has strong walls, containing cells for lesser offenders, around a courtyard, with the more secure gaol buildings to one side, and like the Constabulary HQ, it is entered through a large gate.

There are also both private and public stocks, pillories and whipping posts in Amber: the private ones within the courtyard, and the public ones in the square outside.

In the courtyard are the stocks and pillory, of course, but Amber City possesses all the trappings as well.

This is not the debtor’s prison!

Has a good view right onto Amber Harbor and everything going on at the shore or on the water.

The view is from a small boat on the water at a debark/embark dock.

This is a view before the big picture window was put in, one was put in after Prince Dave took over as Harbormaster. This is a good place to put a spyglass on tripod, as one can easily see the entire harbor from that vantage point. Prince Wolf is getting used to his position, it will be interesting to see what he does.

The level below the Harbormaster’s office is offices for other officials that deal with all events in the harbor. Most people having business go downstairs, few have to or will be able to get past the receptionist fellow and get into the upstairs office.

Prince Dave’s Regent-ally appointed Equerry has office in the lower level. The Equerry has remained behind, for now, one of the few staff that stayed.

The Harbormaster’s office is actually on ‘three’, the main level is ‘two’ and the first level is a level right at the water, a few small skiffs are kept in there, for very official use. Yes it is a boat shed with office space over the top.

And yes, there is security on duty at all times, and they pay attention to stuff happening in the water and concerning the boats tied up in the boat shed level.

Despite everything Amber City at it’s heyday was a quite modern and progressive city.

One relic that survived from earlier days is the Ancient Royal Hospital, rumored to be a former cathedral to a rival faith other than the Holy Unicorn. Currently blazoned the Queen Maud Memorial Hospital, it is rebounding from darker and leaner days.

Princess Jorrah has been instrumental in it’s turnaround, refurbishing, modernizing and upgrading to a once more first class facility.

Tourists seen in the picture from elsewhere, as limited tours are once more offered, after a spiffup after the last bits of war.

All citizens of the City may avail themselves of fairly progressive and modern medical treatment; no more leeches and cupping!

There are also a few clinics operated in more outlying areas of the City, expanding medical care access to all. A certain amount of basic care is free to all Citizens of the City.

After the last few rounds of battle at the doorstep, a suitable facility near the waterfront is being scouted to be turned into a trauma and first response base for the Docks, Harbor, and Naval and other fleets-at-anchor. Funding for this will be appropriated out of the Harbor fees currently levied, and additional contracting amongst the fleets and the Hospital proper..

All delicate, detailed, above and beyond the call treatments; including certain elective ones; are handled at the main hospital.

‘Tourism Medicine’ is only rumored. Most wishing certain elective treatment (such as ‘plastic surgery’)are going elsewhere to get such procedures done.

The Royal Treasury Complex close to Amber Castle in the city

The Royal Treasury of Amber occupies two separate complexes in different but nearby locations.

One is inside Amber Castle where the vast vaults containing the wealth of the nation reside, along with the record archives, and a good percentage of the currency in circulation.

The complex outside Amber Castle consists of a fully walled fortress containing seven attached buildings occupying one full city block. The buildings contain offices. sorting houses and the headquarters of the Bank of Amber. The day to day business of the treasury takes place here.

Where the Royal Mint is headquartered is a secret at the present. It is more likely contained in the Treasury complex outside of the castle, but at present that information is classified.