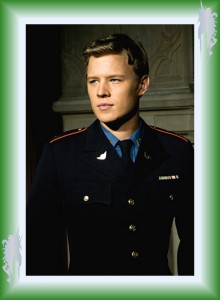 Son of King Brand of Brandenberg and Princess Dara, Grand Duchess of Sawallways

Out of place in the Tudor style court of Amber is Marcus, Captain of the Royal Guard. His uniform is a modern blue military dress tunic. It is easy to keep clean and means he does not have to wear Court Dress.The Royal Guard is a unit that was created by Oberon when he took control of Corwin’s Rifle Regiment that alone uses pink gunpowder. With its off world origins, it was allowed to retain a modern uniform.  The Royal Guard controls many parts of the palace including the Administrative Areas and the Residential Wings. The Green Guard or the Royal Amber Pikemen are under the authority of the Constable of the Castle as are the Yeomen of the Guard (axemen). Gerard has his own liveried regiment guarding his and Oberon’s area, the Treasury and critical parts of the palace.

Marcus was the main gopher for King Oberon and while he never fell afoul of Amber’s powerful and terrible monarch he had run afoul of many princes and factions from time to time. He even spent a few nights a couple times in the dungeon when he annoyed Eric and then Fiona. 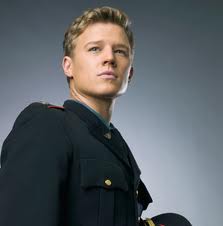 Marcus is a decorated war hero in the Black Road war and other minor wars with Amber. With no military training, he was raised to a commission by Corwin then Oberon put him in charge of a strategic palace regiment.

Marcus is also the Palace Spokespiece and was given the dirty work of announcing royal decrees to the media and public. This has not damaged his popularity in the city.

As well Oberon gave Marcus many tasks including bringing in the new princes, his grandsons / grand daughters and one son. Like Gerard and others, Marcus has a stack of sealed orders in his office (not residential office but guard office) that can be opened on certain days or in certain situations.  Some whisper both Marcus and Gerard have secret death warrants put away.

Up to this point the King nor the Regent officially verified Marcus was of the Royal Family. However speculation has been rife as to whom his parentage is. The ire of Fiona upon him and the friendliness of the usually aloof Brand made Prince Brand the likely suspect. This was verified when Brand taught Marcus many skills.

After Brand’s disappearance, Marcus is the only one given the spare key to Brand’s suite and was known to have access to his papers.

As well, Marcus – while ONLY in the presence of Walter later Geran Ian and Edward together are the only ones who have access to the very very tightly secured pattern.

With Fiona absent, Marcus has an uneasy relationship with the Prince Regent which Oberon delighted in. As well, Martin cannot stand Marcus for his parentage. Gerard’s daughter Michelle and Marcus were an item a year ago before Gerard and Rose (Gerard’s mistress and Michelle’s mother) broke it up. Yet Oberon put Michelle’s suite across from Marcus’ and STRICTLY FORBADE Gerard from reassigning the rooms.

Marcus was raised by poorer gentry in rural Amber near Garnath until the Black Road War came to close. Chaos regiments still spoke of what happened though it has been overblown by the Amber media that Marcus singlehandedly stopped the Chaos Army in time for Eric’s troops arrived. They also say he slew the enemy commander and half the advanced cavalry. All at the young age of 16….?

Bleys surprisingly confirmed all of Marcus’ roles and positions in Amber Castle and left the Royal Amber Regiment and Amber Castle Constabulary free from the flood of Helgrams seeking work in Amber. Marcus is kept busy with his many titles and duties though he tends to commute by trump to Sans Souci Palace. He rarely spends the night in Amber Castle.

Recently, Marcus was involved with his half brother/half uncle Magnus in the rebooting of the Asgard Pattern, created by King Oberon.  There are many rumours floating about concerning Marcus and the influence Oberon had upon him.

As well, Marcus seems to be extraordinarily fond of Faiella, the widowed Queen of Oberon, he drove his bicycle off the castle walls and into the moat while staring at her once. Lately, he was reported to have kissed her and declared he loved her though this is strongly denied by his mother, Queen Mother Dara.

After the second death of Faiella, Marcus has refused to talk about the subject to anyone, burrowing deeper into his work. Rumours are that Faiella tried to stab him when he thought she loved him. Apparently she was accused of trying to sacrifice him to his half brother, the Wotan of Asgard to bring back Oberon. Official statements from Prince John deny this and Marcus is not talking.

Marcus still has cordial relations with almost everyone including his half brother the Wotan Marcus. Rumours are that many Oberon shards were removed by him and destroyed.

He has been known to have procured enough Amber-friendly munitions to operate a ring of heavy artillery ordinance around Amber Castle with a few to spare around Sans Souci Castle.  Reports have it to be -World War II German 88 mm.
Only beaten out by Matthew and Lucius, Marcus is third least favourite son of Brand’s. Brand is reported to get into a sulk and curse his father, when the name of Marcus comes up.
He has since resigned his positions within Amber Castle following issues with the security of certain prisoners in the dungeons.
Marcus is in gentile retirement at Sans Souci despite his young age.

Marcus was 16 when he was first known. He challenged and slew Grand Duke Tmer in a single combat just prior to the Battle of the Black Road. Tmer had wasted valuable time destroying the (now rebuilt) fortress of Garnath giving Eric of Amber time to convince Benedict to join in and reach out to Corwin.

He seemed to have come from the Rolveden Barony of Amber south of Garnath where Oberon’s favourite palace of Sans Souci is located. Later Oberon’s will gave Sans Souci, Rolvenden, all pink gunpowder armed troops, the later disbanded Secret Police and Royal Intelligence Service to Marcus which Bleys ratified at the start of his reign. All royal artillery, all gunpowder troops are moved out of Amber Castle to Bleys’ relief back to Sans Souci.

Marcus had been in the first ministry of Bleys, had been Constable of Amber Castle and in charge of the Royal Dungeon. He banned torture and brought in overly humane status for humans, Amberites and Royals. unfortunately this led to abuse by Llewella who had a plot similar to Mary Stewart where she was smuggling messages in and out. This caused a scandal and Marcus was removed from his office by the King Bleys due to this laxness in security and perception of softness.

Marcus is protected openly by his paternal half brother Geran and covertly his maternal half brother and uncle Magnus. There are rumours that Magnus does it for self interest and there is suspicion between Geran and Magnus on the subject of Marcus. There are some tiny sects that believe Marcus is Oberon incarnate but this has been suppressed by Marcus and Bleys mutually. The Royal Office says it is unfair for anyone to blame Marcus for the Royal decisions in Amber over 100,000 years.

The Ex-Queen and Karm Princess Faiella briefly came to life. She and Marcus looked like it was a budding romance. unfortunately she seemed, like many who are reborn after many tens of millennia, to be cursed or possessed. She attempted to murder Marcus in a bid to restore Oberon. Marcus managed to survive the attack which was in her embrace, by falling into a nearby moat or pond. This was believed to led to domino effect where the Pattern of Asgard was damaged and almost all of Asgard’s white pattern dream of Oberon was destroyed, and replaced by a very hardline Asgard run according to the Viking traditions rather than Germanic traditions.

He seems to have been involved as a young boy with the resistance in the South and had been acting with Oberon and Dara (his mother) in helping Isaac, Obie and Myfanwy in many projects during the civil war. Young Marcus did take control of Sans Souci, the most heavily protected and exclusive Royal Fortress south of Garnath on Oberon’s fiat in the Eric era. Eric and Caine did not dare even set foot on a single foot of land in Rolvenden out of fear of the old King who was still missing. It is believed that Benedict visited Sans Souci and young Marcus in that period and Myfanwy was in the palace during much of the Civil War.