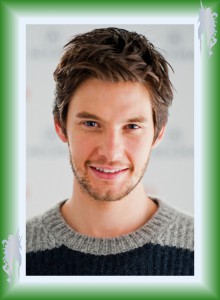 Soren looks to be in his late twenties. He is a couple of inches taller than his father, standing around 6’1″, but is quite lightly built, weighing in at about 160lb. His hair is dark, with tints of red, and he wears a light beard. He has dark blue – almost black – eyes, that have a hint of mischief in them, and he is smiling at the artist.
In his Trump, his dress gives the air of a perpetual student: a grey and black sweater, but with no obvious shirt collar, dark jeans and comfortable, well lived-in shoes. He looks relaxed, almost slouching, and appears to be unarmed.

Soren is the elder of Wolf’s twin sons by Katharine Heisel. He was born in Germania, but came to Tenterden when he was a little over five years old, and after that was brought up by his father. Wolf made certain that Soren and his twin, Blaine, had some contact with each other,  having seen what separation from his father’s twin, Prince John, did to Ian and his relationship with Bleys.

Soren quickly proved to be a very bright child, with a definite mind of his own and his family’s talent for ritual magic. He studied languages and ancient history at university, before going into a career as an archaeologist, gaining his Doctorate before he was thirty. He has recently been accept as a pupil by Princess Fiona, and has walked the Amber Pattern.

None at this time