Another Exercise in Alternate History (with apologies to CJ Sansom)

Another variant on Earth Line history, but with the decision point in 1940 when Chamberlain was replaced by the Halifax and the Appeasement Party, rather than Winston Churchill. Ian took over the project in 1952, the year of Hitler’s death on that Shadow, helped by Wolf and both of their families.

As time passed, Halifax was replaced as PM by Lord Beaverbrook, and the likes of Oswald Moseley and Enoch Powell got into government, bringing with them a far more nationalist, racist and pro-Fascist view, including implementation of the Nuremburg Laws with regard to the Jews. Churchill ended up out of favour, driven out of government, and ultimately running the British Resistance. The more pro-Fascist stance caused great concern among certain of the British dominions – Canada, Australia, New Zealand – although South Africa and Rhodesia liked it just fine.

Britain held out against deporting the Jews until November 1952, but by then the Empire was crumbling anyway, especially India. Beaverbrook went to Germany, and negotiated a new deal whereby Britain was allowed more access to Europe and increased troop numbers (ostensibly for dealing with India), but the trade-off was that Britain had to toe the line with regard to the Jews. They began transportation to transit camps, prior to deportation to the East. However, in December 1952, Hitler died and the transports were halted until it became clear who would succeed him. In the end, the deportations stopped altogether, leading to interesting legal issues with property that had been seized from the Jews before transportation began.

Hitler’s death left Germany with two powerful factions: the Wehrmacht, which wanted to make peace in Russia to stop the haemorrhaging of the young, male German population; and the SS who wanted to fight to the bitter end, so that the lives already spent weren’t wasted. Goebbels became Führer, decided he couldn’t afford to alienate the SS by coming to terms with Russia, and agreed to continue the fight. However, the following March he was assassinated in a Wehrmacht coup, and the Wehrmacht attempted to sign a ceasefire with Russia.

Himmler staged a counter-coup, and civil war erupted between the Wehrmacht and the SS. Himmler declared himself Führer, claiming to be the true heir of the Nazi party and Hitler’s legacy, with Heydrich as his deputy and RFSS.

Six months later, the civil war was still going on, with Americans, under Adlai Stevenson (Democrat) backing the Wehrmacht, who were winning against Himmler and the Nazi die-hards. Even the German Embassy at Senate House in London ended up in a bloody internal conflict, from which Ambassador Rommel and the Wehrmacht came out on top. In the meantime, the Russians (who were already considering that Stalin-style Communism was a bad idea) took advantage of the instability to try to roll up Germany from the East, while the countries in Western Europe, who had been unwilling conquests of Germany also tried to break free.

In Britain, Churchill and the Resistance finally came back into favour with the fall of Beaverbrook – the transportation of the Jews having been the last straw – and managed to oust the pro-Fascist elements, to get back to a more “British” government. 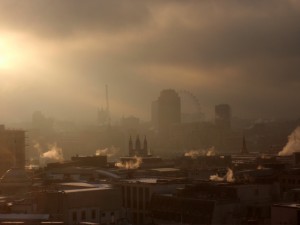 Due to Wolf’s intervention, the IT curve in the West has moved a lot more steeply, so as of 1983, the capabilities of computers, cell phones and other assorted technology are almost twenty years ahead of where they should be. This is also true of medical and weapons, including UAVs and major armaments. In addition, architecture has moved forward considerably.

Britain is strong and remilitarised with a functional atomic bomb and less reliance than Earth-normal on the US – almost none, in fact, as there was no Marshall Plan. Britain reached the moon first, in early 1969, although both the US and Germany have got there since. The German Embassy is now located in Belgrave Square, having been ejected from Senate House with the change of government.

The US has lost interest in Europe, having failed to gain a great deal of influence there after the end of the Wehrmacht-SS civil war. It is pursuing colonial aims in South America and the Far East, and occupied Japan after WWII.

Australia, Canada and New Zealand, which had been on the point of breaking away from the Empire in the early 1950s are back on side. Canada remains closer to Britain than the US, although this has needed the occasional deployment of troops at the border, to make their desire not to be the 51st State clear.

India and Pakistan have gone independent somewhat messily. The rest of the British Empire in Africa is largely intact, as are the French and German Empires, with Italian holdings split between the three of them.
Germany lost Western Europe, with the exception of Scandinavia (including Finland), during the civil war. However, it holds significant portions of Western Russia, including Moscow and Stalingrad (Volgograd), up to roughly to the eastern coast of the Caspian Sea. Heydrich remained in power until retiring on his 75th birthday in 1979. He is still alive and well, living in comfort with the long-suffering Lena near Paderborn, his relatively good health perhaps influenced by the fact that he’s the Shadow of a High Blood. On retirement, he offered the position of Führer to Armand, who had once again proven his charisma in the years he was running the Waffen-SS, but the latter declined in favour of Heydrich’s eldest son ‘Kaiser Klaus’.

Russian Communism has fallen apart, and everything east of the Caspian Sea has pretty much reverted to warlords and private fiefdoms, often run by ex-Communist Politburo members. The technological advances seen in the west have largely passed the rest of Russia by, leaving it about where it should be on the tech scale, without nuclear weapons.

Most of Asia is even further back down the tech scale, and Ian and Armand have been exploring the possibilities of organising lower-tech forces in those areas. That will come under Phase Two of the Dominion Plan.

China is the last remaining bastion of Communism, although it is beginning to urbanise and bring its industries up to Western standards. Tech was coming up from a lower base, but is fast catching up.