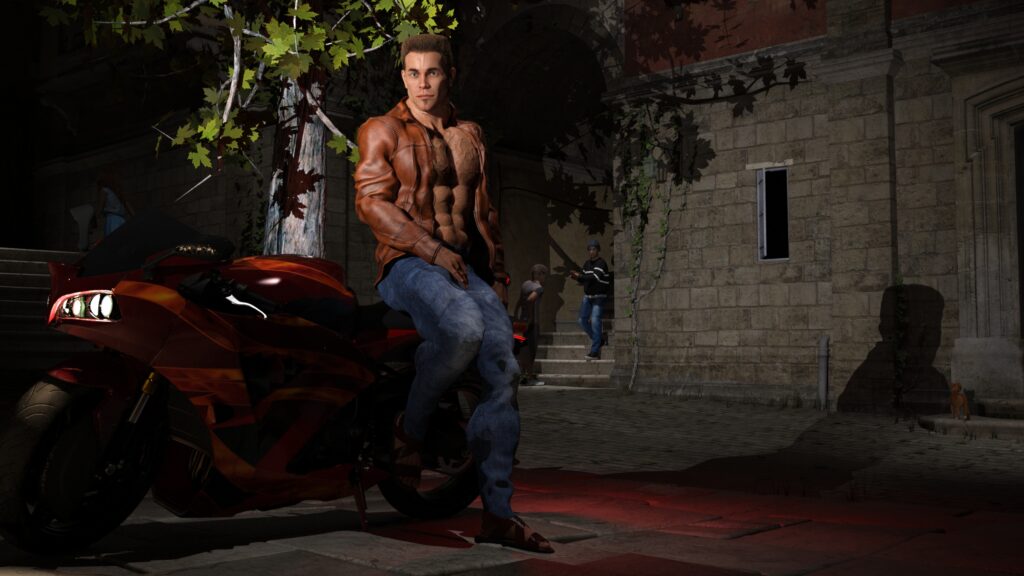 With no memory of his birth parents, Andrés spent his childhood living on a farming slum outside Rio de Janeiro in Brazil. Life was easy and chores were plenty. Schooling was poor and there was much time to run and play with the children of the village.

Living in the slums was not easy. Many times a meal consisted of the scraps thrown from someone else’s table. At the age of seven, Andrés resorted to other means to keep food on the table. Cleaning chimneys, chasing rats from the cellars of houses and picking through the mounds of garbage from the city became his life. Many times he returned home empty handed or with a bloody nose and many bruises.

One of the unfortunate things of being born into the under classes of Rio was death – death by starvation, death by gangs or death by the police. Street kids were a target for many – pimps, druggies and slavers. For the most part Andres was lucky he managed to keep out of their sights. The scar on the shoulder is from the bullet wound a policeman gave him.

The middle aged couple who took care of him were not in the best of health. Doctors rarely visited those living in the arm pit of Brazilian society. They were were thankful for what Andrés brought home and rarely asked questions. His adoptive father died first and the mother a few years later. By then Andrés life had taken a turn.

Government reforms and charity brought money to the village. For the first time in his life Andrés did not have to worry about food. A doctor came ever so often but was unable to save his adoptive father who had developed cancer.

Opportunity knocked. The young boy was given the chance to learn. Words and numbers floated into his mind. The teachers saw promise in the orphan and sent him to the big city. There he learned. The wealthy benefactor of the charity watched the progress of those the organization helped. The benefactor took the brightest of the students and provided them with the best the charity could afford. Andrés excelled. He graduated university gaining a medical degree and the ability at the age of twenty five.  Andrés is fluent in Portuguese with a good understanding of Spanish, Italian and English.

Medicine became Andrés chosen path. His adoptive father’s death and the manner in which those in the slums were treated pushed him in that direction. During his internship he would spend his weekends in his old village helping the needy. This rubbed in the face of some of the gangs but he did not care. The people of the village appreciated his care giving and offered him what protection they could. When the gangs massacred many of the villagers Andrés decided it was time to move on. His adoptive parents were both gone. He wanted to leave the pain behind. Money was no longer an hindrance. His work at a Rio hospital paid well. Still he wanted to start again.  He traveled for a few months and settled on Italy.

The Earth shadow was destroyed when its stable sun went supernova.

One day, Andrés received a letter from a lawyer telling him he had inherited some land on a place called Amber. He googled it and found there was no such place. He threw the paper work out as some sort of joke. A month later he received another letter and a month after that another. A few weeks later a man showed up at his door. It was said lawyer.  The legal man showed Andrés all the documents and even explained where this Amber was. Andrés seriously thought this man had a thick between the ears. He did not believe it until….pop….Andres  was in a medieval hell hole that man the slums of Rio look nice…some smelly port called Amber.

The lawyer took the shocked Andrés to a somewhat clean street with less human refuge running down the gutter than area he was just in. The building was a dump. Falling apart, leaky roof, no windows really to speak of. The lawyer said it was in one of the better areas between the merchants and the rich.

Going inside was worse. Rats running along low, black wooden beams and horrible dirt floors. The upstairs was worse and the basement, well let’s not talk about this. This was a well do to area.  The lawyer explained to Andres that everything was legal and ready for him to move in. Andrés almost hurled at the thought. It was worse than Rio.

Still, Andres knew people in this god forsaken city. He wanted to sell but there was no market. The city had been depopulated by some god forsaken war.  Stuck with the piece of shit, Andrés looked at the possibilities.  Making it into a medical clinic…no…there is not real medicine in the backward mud hole.  Finally he decided on a complete renovation. He gutted the place and recreated a little piece of Tuscany in the middle of a dump of a city. Coffee, baked goods and the finest foods of the Italian region could be had. The place was clean with terracotta floors, a large fire place and something rare in the backwater city  – hot and cold running water and flushing conveniences with a locks. Surprising, Café Tuscans, was hit. The Helgram crowd liked the place.

Housing in Amber City is not as spectacular as Andrés would like. Best way to describe it is primitive. It is comfortable enough. Fire stove for cooking – conveniences like natural gas and electricity are non-existent. Stucco and paint makes the place look less like the pig pen it has once been. Adding running water and flushing toilets was a chore. The tanks in the basement need emptying out every few months. Run off from the gutters is filtered and stored. The glass was poor show he that fixed. The doors were weak. They were fixed with better, stronger wood and triple locks. Spike on the outside of the balcony railing help keep the gutter snipes away. Hot water heating was easy but burning coal for the basement furnace is a messy job. If he had the money Andrés would consider going into the natural gas industry or at least methane. The people in the city throw their waste in the streets. It could be recycled into energy.

Granted to Andres by the grace of King Blys, the earldom of Wembleville is the northern most community in Amber. First  in the northern as a barony and later expanded into an earldom, the earl has provided housing and encouraged settles to move north using architectural and agricultural practice normally not employed in Amber. In such the crown has seen fit to grant earldom more lands (bring its area up to 144 square miles).

Andrés has acquired control of he shadow Dharmvyadha. Exploring the newly found territory, Andres looked to what his roles would be. The shadow already had an established government and society. Regardless of the fact the people proclaimed him the reincarnation of their Sultan, Andres did not want to interfere in their society. He has accepted the idea of being head-of-state in the manner of the president of many earth nations – a figurehead.  Having decided to live in Dharmvyadha, Andres thought it best he live outside of the cities. During an afternoon of mountain climbing he decided to build a home on high up the slopes as far from the nearest city.

Admiring the advanced, almost science fiction like architecture, Andres decided to keep the tradition. His home is modest with three bedrooms, an office, huge open living and dining area. All the latest modern technology is available – holographic communications systems, computers and electronics. Furnishings are minimalistic, original artworks are plentiful.  A long glass wall houses a collection of fine silver crystal figurines and other art treasures. The home is completely off the grid and all waste is 98% recyclable.

While motorcycles are considered quaint by the local population, Andres replaced the one he lost when his Earth vanished in a supernova. He also indulged in the anti-gravity equivalent. He is the first to admit it is not the same as riding on twisting mountain roads at 150 kph.

The Alps stand high on the horizon.  Andrés learned how to ski and mountain climb. He did the Matterhorn for his twenty ninth birthday. Skydiving came next and he took up water skiing.  A member of the local soccer league, many Friday nights vanished getting drunk with the boys. Screaming through the tight corners of Alpine highways at one hundred and fifty kilometers an hour on a motorcycle satisfied his need for a thrill.

Bleys comes into the room and greets Wolfe, “Grandson.”

“Your Majesty,” Wolf says, with a suitable bow.

Andres approaches Bleys. He looks around and places his hand on his heart. Suddenly he looks as if he recalls something and slowly gets down on one knee. In a trembling voices he says, “I pledge allegiance to the flag of the Uni…of Amber and for the…king…for which it stands. I do swear I will be honest and serve our sovereign kingship, and I will do right to all manner of people without fear or favour, affection of ill will. To Bleys…er…the king, his heirs and successors, I offer my services to the king, without reservation, such as they are.”

“Thank you nephew, I accept your allegiance to me and to the Crown. The flag is not needed as the monarchy is the living symbol of the realm.”  Bleys says, “And in return, I name you Viscount of Wembleville which has two manors in Amber north of Garnath.”

Andres looks like a bit surprised. “I expected…well I guess I was wrong. Thank you…majesty. It is an…unexpected honour though I have not idea what to do with it.”

He looks to the king. “Your majesty, is there anything you need of me now.Sign a piece of paper to prove I did this thing?”

Raised from birth by a childless couple of his village, Andrés has no idea who conceived him.

Upon coming to Amber he discovered his father to be Dalt and his mother is Bleys’ deceased daughter Melanie.

He studied fencing and swordsmanship in the fashions of Kenjutsu and Paulus Hector Mair.

Time was spent with the Gurkhas, SAS. KGB and US Navy Seals.