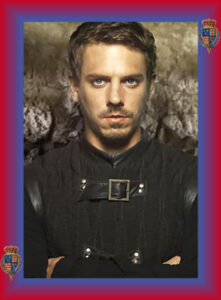 He was born on 10 January 1398 on the world of Agincourt, an experiment in alternative history undertaken by Ian Cushing-Helgram, his grandfather. Having been brought up in the turbulent years of the deposition of Richard II, and the reign of Henry VI, he does have something of a Medieval mindset.

Very little is known about him, save that he has walked the Amber Pattern and his card is now in the family deck.