Mistress and lover of Wolf Ulrich. 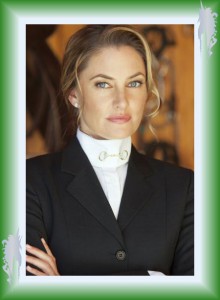 Katharine is very much your typical Aryan blonde. She stands around 5’6″, has the build of an athlete or a gymnast, and holds herself like a soldier. She has piercing, ice blue eyes, and attractive, but slightly hard features.

In her Trump, she is dressed for riding, in a white shirt, dark hunting jacket, jodhpurs and riding boots. From her crossed arms and general stance, she comes across as the kind of woman who won’t take nonsense from anyone/ She looks at the artist appraisingly.

Very little is known about Katharine, as the first time she came onto the Family radar was at the wedding of Christophe and Jorrah, although there is definitely something of the Hendrake to her appearance.

From what can be gleaned, she was  born and bred on Germania, and holds rank in Dieter’s Waffen-SS. Rumours suggest that when she first became involved with Wolf, it was as much as Dieter’s eyes and ears, keeping track of his grandson, as because of any form of emotional attachment. However, as the years have passed, they have developed a much closer relationship. They have two acknowledged children, Soren and Blaine, and it is rumoured that they may also have a younger daughter, although as yet, she has not been seen in either Germania or  Amber.