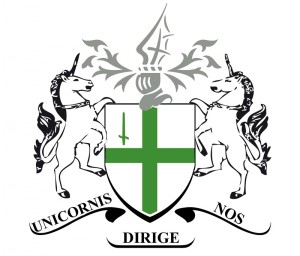 Other places of entertainment besides bars, clubs and restaurants are outlined here.

The Globe Theatre and Playhouse 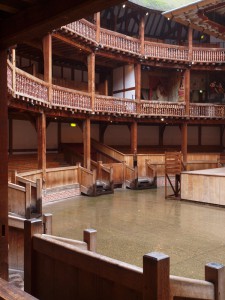 The Globe Complex is owned by the City of Amber, and is run by the City administration mainly as a venue for plays, although they do sometimes put on traditional musical events. There are two theatres in the complex: a traditional outdoor theatre, which is mainly for use in the summer; and a smaller, more intimate indoor one for winter productions. Of the two, the Theatre caters more for everyday entertainment, with tickets starting at just a few pence, while the Playhouse is aimed at a slightly more affluent clientele.  The two share a booking office, but each has their own lobby, bars and restaurants.

It is a build in the round, giving it a more intimate feel than a more formal theatre, and is largely built of wood and stone. It is intended as a venue which anyone can visit, from the most humble labourer (one penny standing) to the richest nobleman (private boxes, ten pounds). The standing areas are uncovered. However, there are also three tiers of covered seating where those who wish to can shelter from the weather. 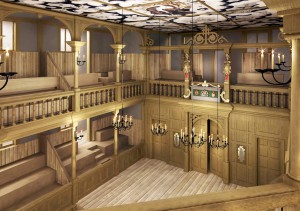 Recently opened for the winter season, the playhouse is laid out in a more Jacobean style. While the seating is similar to the main Globe Theatre (bring a cushion!), the Playhouse is only on two tiers. The whole theatre is candlelit. 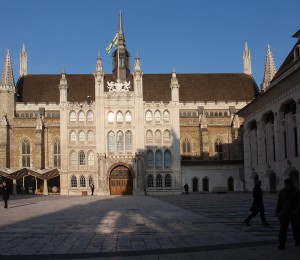 The Guildhall Square is a decent-sized open space surrounded on three sides by the building itself, with the original building in the centre and to newer wings. The east wing now contains a public art gallery and library, while the west wing includes additional offices and administration space, and also houses the Guildhall School of Music.

The courtyard itself serves as a public space for city wide events such as open air concerts, poetry recitals, puppet shows for the children, and many other numerous free celebrations of the performing arts, as well as paid-for concerts during the Summer, often performed by students of the Guildhall School of Music. It also plays host to a Yuletide market for the last couple of weeks of December, and the first week of January; and a farmers’ market most Sundays in the warmer months.

The Lord Mayor recently announced the establishment of a new park for Amber City. As the people will remember, in the run-up to 1st May, certain areas of derelict wooden housing were razed to make fire breaks, just in case of a citywide conflagration.

The largest of those areas has now been converted into a park and recreation area. Facilities include three public sports fields, a bandstand and a large cafe. There is also an area set aside for a “Speakers’ Corner”, complete with three small platforms, for those people with strong views who wish to express them. Anyone wishing to preach or proselytize is encouraged to do so here, where they won’t be hassled by the authorities. However, the authorities can’t guarantee whether speakers will be hassled by other Amber citizens.

Firebreak Park was officially opened by the Mayor on Midsummer’s Day, with a celebratory festival of food, music and fairgound games for the children.