Thorn is the son of Elowen Daveth-Helgram and Ian Cushing-Helgram, although he only learned about his father relatively recently. He is the younger twin of Jowan by about 25 minutes. 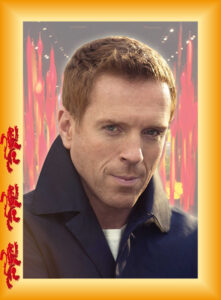 His mother, Elowen, is the eldest daughter of Daveth Helgram (a younger brother to the old Duke Helgram), and Dybele Hendrake. Elowen also had a younger twin, Eithne. Dybele left the girls with her father’s House, rather than take them into Hendrake.

Thorn is a nephew to Geran, Dalt and Dieter, and their younger sister Geraldine (deceased), as well as Queen Flora. Unlike his brother, who is a Helgram through and through, Thorn takes more after his Hendrake relatives.

He is known to have undertaken training at the Hendrake Military Academy, and given his origins, it is likely that he is both a shapeshifter and a Logrus initiate. He is primarily right handed, but was trained to wield a weapon with his left, as well.

He has walked the Amber Pattern and his card is now in the family deck.

Thorn stands around 6’0″, and carries himself like a soldier. He is solidly built and probably weighs in at around 185lb, but this is definitely muscle, not fat. His hair is more auburn than the red of his brother, and his eyes are grey rather than blue, so he is less obviously “Helgram” than some of the family.

He is pictured in front of some kind of structure or artwork, which gives the impression of Helgram-red curtains or banners. He is dressed simply, in a dark blue-grey overcoat over a white t-shirt and loose dark blue cotton trousers that look like they would be comfortable to fight in. Under the coat, there’s the suggestion of a blade, scabbarded on his left hip.