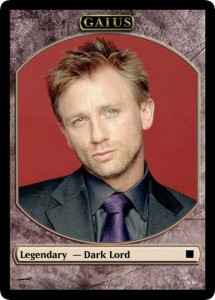 Gaius was a son of Bleys who was known as the Great Liberator of Amber during the civil war against the foul forces of King Eric.  He was betrayed by a woman, perhaps one of his eight wives, and personally tortured and used in black magic rituals before finally being murdered by Eric acting in his capacity as Red Glove leader. His body was set as a cornerstone with three of his fellow Bleys sibblings in what was meant to be King Eric’s new grand palace in Amber. His final resting place has now been turned into a national monument .

Most of his offspring were brutally murdered by his many enemies however a pair that he had with Fiona live on: Isaac and Icarus.