Baylor is the son of King Bleys of Amber and Queen Elizabeth. However, he was born while when she was married to Brand: after Matthew’s birth so Brand was distracted. 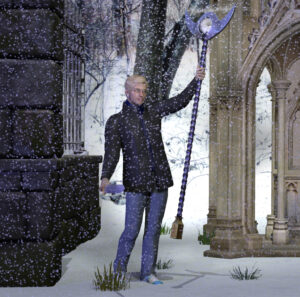 In Bleys’s opinion, this shouldn’t be a big deal any more, as he and Elizabeth are now married, and was heard to say “It is easily to legitimize him now and deal with a hissy Brand than worry about it coming out if we cover it up and say he was born in faster time.”

Baylor is friends with Franz, and together with Augie and Wolfram, is a member of the Quarto.

His early upbringing involved Elizabeth keeping away from Brand. He attended the Helgram Academy earning a couple Doctorates despite his anti-academic tough guy image. Helgram Academy records them being in Amber History and Advanced Esoteric Alternative Magicks.  His education was funded by King Oberon directly before and during the Amber Civil War though he completed his studies before Patternfall.

Baylor was involved in 1997 Earth in a shadowy Yale based organization controlled by King Oberon of Amber (Solstice) quietly referred to the as the Nine. Membership in the Nine is not completely know but many rumours abound.

Bleys legitimized Baylor by Royal Decree in both Amber and the Golden Circle. Baylor can be the author of his own misfortune. He has a sarcastic mouth and can shoot it off. One rare time he behaved was at a gathering of his maternal half brothers, Paul, Lucius and Matthew with their mother Elizabeth. Lucius misbehaved terribly and Paul was offended.