This has been set up as an experiment for players to develop characters within the Asgard setting, under Solstice. Asgard was closed for some time, during what was known internally as the War of Reaving, and many changes took place within it at that time.

The Asgard Game gives players the opportunity to create 150pt characters, and then explore the Asgard setting, with a number of differences in magical abilites and other powers. At this point in time, this is a seperate game to the overall Solstice Game, and characters are not necessarily compatible with the Rest of Creation at this time.

At the current time, the action is centred around the frontier city of Thrymhold. The city is split into four administrative Wards, each with a constable to keep the peace.

Having solved a problem with non-humanoid creatures attacking the village of Myrwan, the characters have come to the attention of Leif Onrolson, the Constable of the East Ward.

Other notables around Thrymhold include:

A list of other NPCs of note encountered elsewhere thus far can be found here.

Thrymhold is located close to the “Iron Wood”, a huge forest that stretches west and south. It is largely unsettled, although there are a few small villages, with which a certain amount of trade goes on.

One of the villages is called Anston, a little settlement three days to the west by wagon. It is run by a man called Kinlan. The settlement comprises one family, more or less. Onrolson described him as a “thug and marchlord, at best”, and he rules because he keeps the rest alive.

“There are a lot of things that come out of that wood. Some medicines…drugs….research items. You can imagine. There’s quite a market for such things.” – Idan of Thrymhold

A Map of Inner Asgard 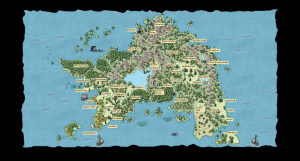 Resources for players interested in the Asgard Game can be found at:

Sample characters can be found here.