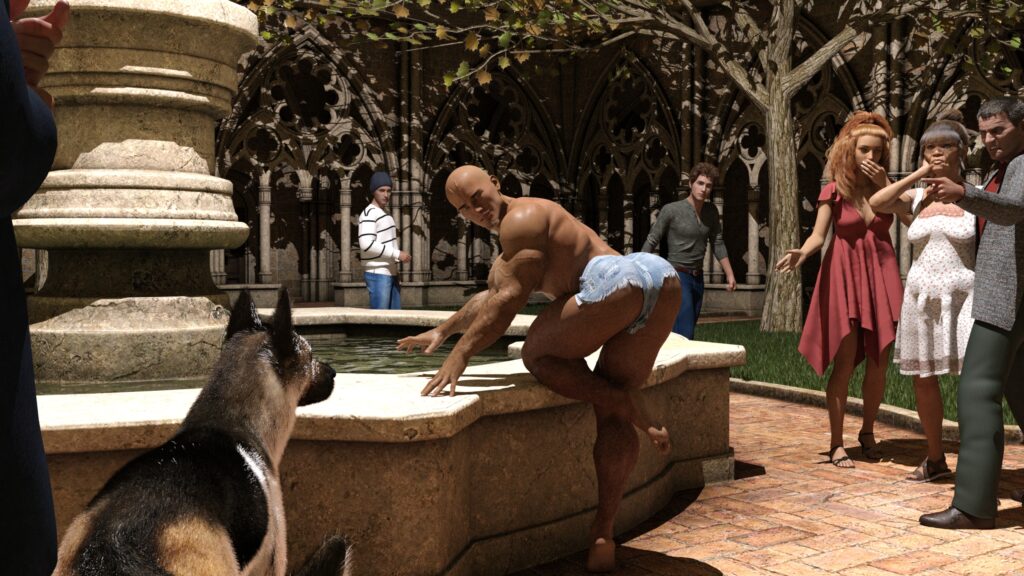 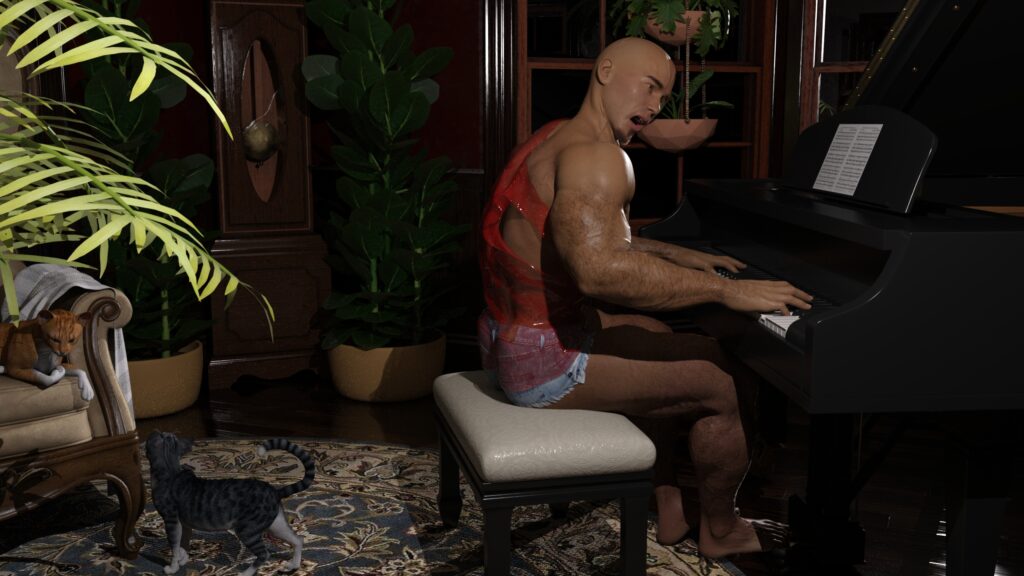 Kalyn is a happy go luck sort who does not really care what other people think of him. He is commonly found bathing in public fountains and wears a wide range of clothing rediscovered from dumpsters and garbage heaps. At night he can easily be found sleeping under a bridge somewhere.

His claim to fame, if it can be called that is, his voice and ability to play a variety of instrument. He is commonly found strumming a guitar, playing a violin (Chinese and western) or tickling the keys of any of a grand piano or blowing into a flute on sidewalks, street corners or park or by the fountain he just bathed in.  His natural mezzo-soprano voice gathers huge crowds who kindly donates to coins to keep the young man fed.

Recently, Kalyn, accompanies by his father, set a petition before King Swayville of Thelbane and Emperor of the Abyss Empire to have Kalyn appointed Don (Headmaster) of the Free University and Research Rock in the Tamaril Free State inside the Dominion of the Abyss Empire.

The Emperor of the Abyss Empire made the following proclamation:

Swayville will grant a provisional one year Charter to be followed by a permanent Charter under the Seal of the Abyss Empire.

He has granted it autonomy and local (non lethal) jurisdiction to act as an Imperial Charter Institution and Imperial Free City.

Swayville names Kalyn of House Suhuy (Barriman) as the Grand Don answerable to a Board of Governors appointed by Swayville.

The governors include Prince Suhuy as Chairman and will include: Grand Duchesses Dara and Minobee, Grand Duke Bleys (represented by Princess Royal Fiona of House Helgram), Prince Dworkin Barriman of Dworkinways and Dukes Rexfords and Celestine

Following a recent and seemingly useless attempt at stupidity one the parts of others, the press quotes Kalyn as saying: 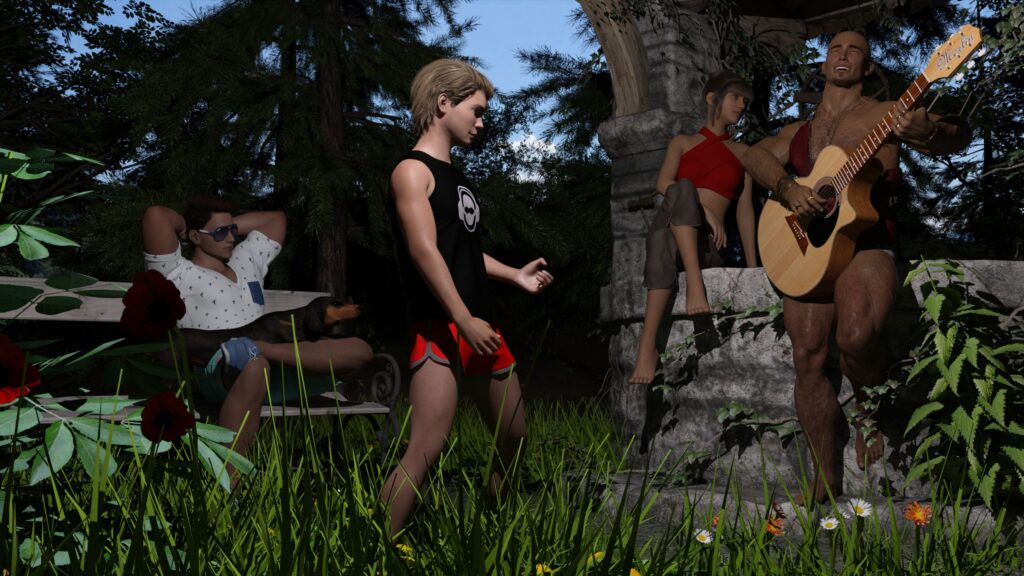 “You highness, can you confirm or deny the calms made by Princes Michael, Taft and Tennyson?” The reporter presses.

Bopping his head back and forth Kalyn shrugs and keeps playing for the benefit of the crowd of girls hanging on his every word. “You do not want to hear me sing, they all do?”

A horde of teenage girls and boys hover close to the piano pining for more.

“I did not see the start of it. I took a bath in the fountain. Why even put up a stupid screen so that people could not see, what and invasion of my privacy. Prudes.”

The reporter’s face scrunched up. “When did you get involved?”

Rolling his eyes Kalyn plucked an odd chord on his piano and the teenagers swooned. “Your tedious. All you want to hear about it violence . . . boring . . . You could comment about my music, my voice and my beautiful body.”

“Oh yeah, the all mighty but. You damned reporters are just as bad as some of my relatives.”

“Yeah, but your not going to give up. Give a report or Brit a bone and you do not let it go?”

“Okay, I got involved when I heard something about poison. Turned out to some harmless chocolate that makes you shit . . . lots. Big deal. We’re as good as gods. Laugh it off and find something more important waste time on.”

“So one of the princes . . . yes  . . . Brit I believe starts to haul on people. i mean really overboard. He torturing the poor waiter that had been paid to deliver the drinks. I blocked the doors to stop those three complaining princes from getting in. It would only have gotten worse. When they took off, I followed them. After that I have not idea what happened to the poor waiter. When I last saw the poor waiter he was screaming for his life.”

“Is Prince Brit a brut?”

“The grenade in the pub was useless overkill. It took a while to get he shrapnel out.” Kalyn banks his hand down on the the keys. “We could have talked it out.”

“So it’s true he got the countess.”

“He took poor Vanessa and tortured her in the most horrible . . . I had to leave at that point.”

“So Prince Brit is a brut?”

“Why didn’t you stop him?” The reporter asked.

“His house, his rules.” Kalyn closed the cover of the keys and stood. Opening is violin case he slowly folded the piano into it. The teenagers pouted.

“Is it true you helped?”

“If you could use five words to describe Prince Brit what would they be?”

Kalyn laughed. “Do you think I’m that stupid?”

“You’re afraid of him?” The reporter pushed the recording crystal closer.

“You watched him torture someone and tell me you would not be afraid.”

“Yeah, yeah, most regrettable. Learned a lot that day. Should have stuck to music.”

“But you’re as bad as the rest of them?”

“The royals of the Great Powers who think us tiny people are crap to be scraped their, your boots.”

“The failing of our kind.. We treat those we think are lesser like . . . as you say . . . like shit. Sorrowful legacy. Now if you do not mind i think I need to have another bath to cleanse the smell of this interview away.”

“And Prince Dave? What of him? Is he the psychopath people claim he is.?”

Kalyn blinks out in spray of Logrus.