1″With Roman style traditions including crucifixions and cat of nine tails, we know that Lucius will certainly be able to ensure that everyone is safe tonight.”

–  from Howdy Do News Magazine 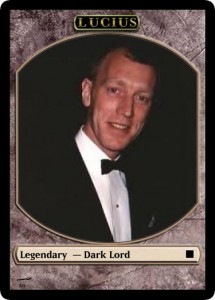 Lucius was raised in a shadow of Rome where history went very differently than many are familiar with. He retains many of the styles and traditions of this upbringing however since arriving in Amber and travelling the realms he has started to accumulate new tastes and fashions.

It is known that he attended some classes with Matthew during his youth and he retains a close relationship with his brother. The pair have been involved in many activities in Shadow involving conquest and loot extraction. Distinctive Markings: None known at this time.

Lucius stands about six feet four inches tall, with a build on the slender side. A thick shock of golden blond hair blends with lightly tanned skin. His Devil’s Own blue eyes take in the unfolding situation with precision. With a handsome visage, he appears perhaps in the early twenties of age. His voice is firm and clear, though it tends to contain soft undertones.

Blood red cascades down the shoulders as his cloak covers over much of his frame, clasped with a golden Merovingian Bee. He also wears a black doublet with darker red piping and highlights. His crisply pressed slacks match the doublet. Tall black leather jackboots are upon his feet, reflecting things with polished clarity. Glinting out from the shadows is the hilt of a fine ebony blade, a ruby upon the pommel. Occasionally a smaller hilt can be made out, with a silvery skull polished to a shine. A Glock semi-automatic pistol is holstered on his belt.

Lucius has demonstrated that he is an initiate of the Pattern of Amber.  He has also discussed and claims to have some knowledge of magic.  Discussions about military matters seem to be of great interest to him.

Master of the Fates of Arda

Lord of Undiscovered Country Inside Brandenburg

Royal Duke of Hossenfeld, in Brandenburg

Royal Duke of Biddenden located in the southern plains of Amber

Tri-gold ring that depicts Ouroboros with a single diamond eye.

Notes on Prince Lucius from the Tiereth ‘Envoy’s Guide’

This guy is crazy.  And not the fun kind of crazy, either.  More like the old-school, scary-ass kind of crazy.  He runs a totally whacked-out totalitarian state in Ultima Terra.  He has on occasion been at loggerheads with our lord.

On the other hand, he’s never made any particular offers of violence against us like, for example, Prince Geran.  He has occasionally cooperated with our lord.  He appears to be good friends with Prince Jericho who’s pretty cool (see “Prince Jericho”).

So…our recommendation is to stay out of Ultima Terra, and adjust your approach to Prince Lucius based upon the politics of the moment.