The Power of Asgard has grown, and, with it, so too has the span of its control.  Originally, the realm consisted only of the Nine Worlds resting upon the length of the World Tree Yggdrasil, but, over time, Asgard has cast her own shadows and has begin colonizing those realms nearest to it, forming the Iron Ring.  Beyond these more native pieces of soil, Asgard has also established its presence throughout the shadows of Creation, adopting and/or taking embassies as well as fortified holdings.

Inner Asgard and the Nine Worlds

The NIne Core Worlds of Asgard lie behind the Gates, metaphysical barriers established by the Great Rune.  Although may paths allow those with the power to do so to cross these portals, for most, these inner lands are locked beyond anything but imagination.  Luckily, this concept works both way, preventing some of the more dangerous of these inhabitants from escaping into the realms beyond.

The Spatial Geography of the Nine Worlds

The lands of Asgard and its associated Worlds are most easily understood when they are considered in terms of a cylinder. From Asgard on high to the lowest depths of Nilflheim, the worlds circle the Great Ash Yggdrasil as it descends.

For a description of each of the Nine Worlds, see the sub-pages associated with each:

Arrayed in an ever-growing sphere around the Great Rune, the Iron Ring consists of an increasing number of shadows that fall under Asgard’s control.  Home to their own races and peoples, these shadows have rapidly found themselves playing host to Asgardian settlers (most commonly led by retired Warband leaders) who spread the Power’s culture and society within their realms.

The largest city in the Iron Ring is the capital of Hrafnborg.

Asgard has established various points of presence throughout the Creation.  Political embassies, Warband recruiting offices, fortified shadows, and even private entertainment clubs (such as the Gullnahol) all fulfill their purpose – ensuring that knowledge of, and access to, Asgardian culture is available in all lands.

Yggdrasil: The Tree of Life

In the middle of Asgard, where the gods lives, is Yggdrasil. Yggdrasil is the tree of life. It is an eternal green Ash tree; the branches stretches out over all of the nine worlds, and extend up and above the heavens.  Four deer run across the branches of the tree and eat the buds; they represent the four winds. There are other inhabitants of the tree, such as the squirrel Ratatosk (“swift teeth”), a notorious gossip, and Vidofnir (“tree snake”), the golden cock that perches on the topmost bough. The roots are gnawed upon by Nidhogg and other serpents. On the day of Ragnarok, the fire giant Surt will set the tree on fire.

The Roots of Yggdrasil

The three roots of the World Tree reach downward into  the realms of Asgard, Jotunheim, and Niflheim are located.

Three wells lie at the base of each of Yggdrasil’s roots: 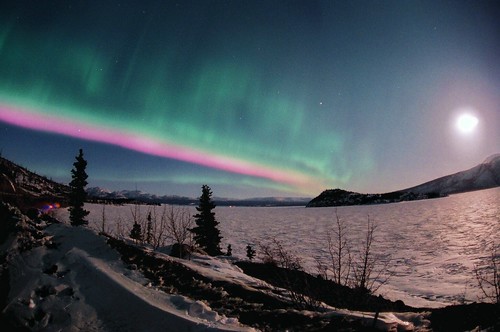 The Bifrost, or Rainbow Bridge, is a gateway or portal connecting Asgard to other Realms.  Most commonly used to travel to the other Eight Worlds, it can be tethered to other lands through the use of rituals.

The Bifrost was, historically, guarded by the Aesir god Heimdall.  Since the raising of Asgard, Heimdall is still missing, and the guardianship of the bridge has fallen to the King Who Reigns.