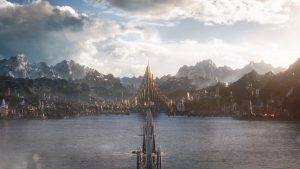 The Power of Asgard is both recently come to the stage in Creation and one of the oldest Powers known. Originally created by Oberon in his guise as the One-Eyed Odin, the Power was created as an alternative to the more staid and static Amber. Within Asgard, Oberon was able to experiment wildly and grow his practices and policies, setting the stage for his later life. Due to interferences from external forces, the lands were maimed and abandoned, fulfilling much of the fabled legends of Ragnarok. With its Pattern broken, the inhabitants battered and flung off into isolated fortresses, and massive destruction throughout the Nine Worlds, Asgard lay forgotten by all but its King and those handful of creatures that managed to tap into the erratic powers.

Finally, the Power was rediscovered by Oberon’s son, Magnus, who took up residence and began the process of rebuilding the storied Homeland of the Gods from his youth. Years of effort eventually resulted in a massive ritual that proved able to repair the Pattern, breathing immediate life into the ruined lands and sending shockwaves through the other Powers as the poles of Creation shifted. The days of change were not done, however, and within a dozen years, the land found itself under attack by forces from within and from the Rest of Creation.

Recently freed from decades of fighting and seclusion from one such struggle, Asgard has returned as a conflicted society, with one foot firmly residing in its historic past and the other stepping out into the modern worlds of its peers. The very nature of the Nine Worlds of the core power ensures that the lands constantly struggle toward Balance, splitting power among the various reflections of the Great Rune and the peoples and creatures that abide within its reach. That said, Holy Asgard has always shone the brightest, and this has never been more true than in the modern days. Moving past the War of Reaving, Jarngrimr, the Twiceborn King who Reigns, has broadened the diplomatic ties both within and outside of the Power, building bridges of diplomacy and presenting a united face against those foes who would harm Odin’s Lands.