Eldest Son of Christophe of Parys.

Rumored to have been the ward of Benedict.

First public appearance in the court of Swayville.

Description: “A young man in his early 20s arrives dressed in the cavalier style of a Louis XIV courtier, resplendent in a sumptuously embroidered high-waisted gold-brocade jacket with a wide white lace collar and lace cuffs. An elegant cape of gold cloth lined with blue satin is casually draped over his left shoulder. His loose pantaloon breeches fall to the knee, showing knee-high boots turned down with lace, and on his head he wears a wide-brimmed hat with feathers over long, loose hair. He has a neatly-trimmed pointed beard and mustache, and bright blue eyes. As he speaks to the herald he removes his hat and drops a pair of riding gloves into them and hands them to a servant with a nod.” 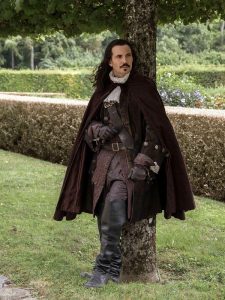 Since the coronation of Aleksander as King of Outer Parys, Jean-Marc has taken up residence in his father’s estate of Versailles,  from where he serves as patron of the les quatres écoles d’art founded and funded by his father.  These four schools, which study Classicism, La Belle Epoque, Avant Garde and the Émigrée School, have their primary offices there and oversee both formal and informal study of art throughout larger Parys and the Silver Rose Circle.