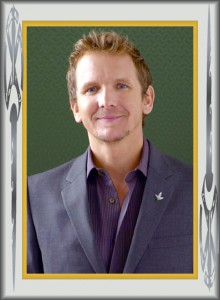 Ambassador Conrad is the representative from the newly-discovered world of Sanguine to Germania.

Conrad looks to be in his early-forties. He stands around 5’11”, and is of medium build, weighing in somewhere around 155lb. From his bearing and general stance, it’s obvious he’s been in the military at some point, and he has the build of a pretty serious athlete. He has a pleasant, open, lived-in face, with distinctive light blue eyes and sandy-blond hair which is cut reasonably short, but goes a bit wild at the top. He is prone to five-o’clock Shadow.

When on official business, he appears to favour well-cut suits, with dress shirts but not necessarily ties. He will always wear a pin in his jacket lapel which is reminiscent of those worn by some of Dieter’s more favoured civilian supporters and agents. When in more informal circumstances he seems to prefer long or short sleeved shirts, often of denim and cotton, and comfortable trousers, although these are almost always neatly pressed. Most of the time, he doesn’t carry either a firearm or long blade, but he does always wear a dagger in a scabbard at the small of his back.

Given that he has been accorded the same rights and privileges on Germania as any other High Blood, it is obviously that he is related in some way to the extended Cornelian family, although exactly how has not been specified.

He is very personable, and is obviously skilled in diplomacy and administration.

He also seems to be something of an expert at making things, tinkering with machinery and combining magic and science.

Involvement in the Lorraine Region

Conrad has recently been appointed as Protector of Moravia and Austria in the Lorraine Cluster of Shadow. This move took some in the diplomatic community by surprise, however, a statement from the Sanguine Empire indicated that the decision was made part of the ongoing relations between the Realm of Sanguine and Fuhrer Dieter of Germania.

At this time, little is known about Sanguine, except that it has a very similar outlook and structure to to Germania itself. It must be somewhere off the beaten track, however, or the chances are that it would have been encountered by now.