Age: Magnus is the easy elder of the new crop of princes and princesses, appearing to be somewhere in his late 30s.  His memories have most certainly been tampered with, making his past shrouded in mystery even to him.  As such, his true age is unknown, but given the fact that he recently discovered references to himself as a Norse god, it must be in the hundreds of years.

Hair: Magnus’ hair is dark blond fading to gray.  He usually wears it nearly to shoulder length.  His beard is kept short.

Eyes: Blue (only one).  His left eye obscured behind a black (usually) eog eyepatch.  In recent days, it seems that his left eye has regrown, but Magnus continues to keep it covered.  On the few times that it has been seen, typically involving mental magics, the eye seems to glow a lambent blue.

Body Type: Magnus is not thin, but neither is he heavy with muscles.  What mass he does have appears to have been earned through work rather than any work in a gym.

In his homeland shadow, the male-dominated society of his raiding people demanded that everyone exist somewhere within an invisible hierarchy of rank, responsibility, and authority.  For Magnus, only two paths to power existed for a young man – the axe or the priesthood.  Although he is a fair hand with spear or axe, he did not feel the call of the berserkergang warrior.  His intelligence and understanding led him to the priesthood, and the young man rose quickly, his hidden Amberite nature setting him head and shoulders above his peers.

Over time, his work led him to the priesthood of the All Father Wotan and the study of the Æsir rune magics.  His devotion was sealed upon his elevation to high priest where he plucked out his own left eye in a sign of servitude to his god. His devotion, skills, and his natural, and obvious, unwillingness to be bullied by his militant brethren, set the young man’s path to confrontation.  Amongst his people, stories are still told of his confrontations with war leaders and raiding chieftains who chose to disregard the fortellings of the one-eyed Magnus.

Like his deity, Magnus led the life of the wanderer rather than residing within any single settlement.  He moved from settlement to settlement and was welcome, if not always welcomed, at the tables of the mighty.  Like his god, to the warlike people of the longboats, he became associated with wisdom and war, battle and death, and the powerful magic and prophecy that his runes showed. 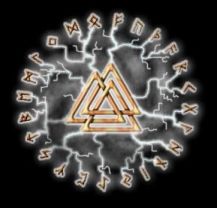 An initiate of the highest levels of the magics of his people, Magnus is a formidable sorcerer by any view.  Following his initial exposure to Amber and the realization that his god, Odin, was none other than Oberon, Magnus stepped away from his faith and concentrated more intently upon his sorcerous studies.  Unlike most of his peers in Amber, his magics are not so freely cast.  Spell and curse, alike, he often empowers his magics using the runic characters of his people, whether traced in the air or marked upon some media.    His clothing and rough jewelry echo this fact, bearing the graven runes for all to see.

Magnus has shown himself to be a deft hand with these spells, demonstrating divination, evocation, and thaumaturgy with equal ease and power, although his application is often demonstrated as “brutish.”  He has been witnessed creating and running detailed ritual magics that he often uses to perform more subtle and controlled workings.  His powers have, thus far, defied classification as either “light” or dark,” and as Magnus himself once said “Power is power.  Only fools try to give it other names.”  Unsurprisingly, the barbaric wizard has seemed to spend his every free moment deep in study since he arrived in Amber.  Even when he leaves, one or more of the heavy tomes are tucked beneath his arm.

He has shown definite battle mastery of weather magics, most successfully demonstrated through his summoning of a huge tornado during a recent Shadow battle.

True to his training, Magnus carries several pouches and items of graven jewelry.  Known items include a bag of bone rune tokens, a heavily silver necklace, and a copper bracelet that was once seen to transform into a 7′ long leaf-bladed spear.  Runes also adorn many of the surfaces of his daily wear, including his eyepatch and various buttons and belt links. 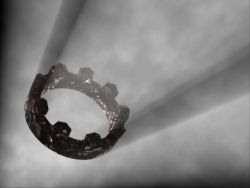 Amongst the scheming princes and princesses of Amber, two things have made Magnus stand out from his peers.  From all statements and oaths, the one-eyed man is loyal to only one force in Amber – the King, Oberon.  When he was found by the Marcus, the prince and Captain of the Guards, Magus was told that his Wotan and Oberon were one and the same.  What passed through his mind that day is only for him to tell, but he accompanied the Amberite without delay.  Following Oberon’s “death,” Magnus seems to be alone in his belief that his father will one day return.  His focus on this topic has led several other members of the royal family to view him as a possible threat or troublemaker.

The second aspect of his personality that colors his existence in Amber is his open tendency to confrontation.  By nature and environment, Prince Magnus has shown himself, time and again, to be only too willing to face those who treat him with disrespect or challenge the rule of Oberon.  His brutality in the pursuit of these confrontations have caused many to avoid the man.

After discovering the broken lands of Asgard, Magnus has begun to take steps that lead to its recovery.  Golem-like creations can be seen moving across the landscape, clearing the piles of shattered stone and ruined statuary, and ghostlike figures of men and women dressed in barbaric splendor have begun to appear regularly.  Even the local Pattern seems to have been partially rejuvenated.

Magnus has recently become involved in the ongoing struggles in Middle Earth.  He has discovered a existing reincarnation situation where it appears that he is the returned spirit of the Vala Námo, or as more commonly named, Mandos.

He has set his seat at Ost Elendil in the former Arnorean capital of Annúminas on the shores of Nenuial (also known as Lake Evendim).  Claiming lordship over the former kingdom of Arnor, he has begun restoring a number of fallen towns and monuments (including Annúminas, Fornost, and Amon Sûl).  He has begun establishing relations with the Elven nations.

Magnus is most commonly dressed in shades of blue and gray.   His taste in jewelry tends toward silver and sapphires.

His personal sigil is the rune “Dagaz.”