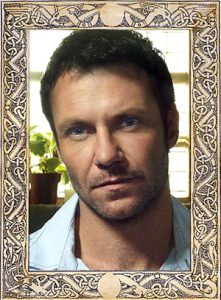 Ari looks to be in his mid-30s, although he’ll actually admit to being in his early-90s. He has a somewhat weathered complexion, as of someone who travels a lot, and spends days on end in the open air.

He stands about 5’11”, and is of average to strong build. His hair is fairly short, and of a dirty brown colour with blond tints in certain lights. However, the first thing many people look at when they see him is his clear blue-grey eyes, which give the impression of missing little.

He is usually dressed in simple cotton or linen (mostly white, grey and light green) and woven breeches of wool or cotton (often greens and browns). His clothes are always well made, but often look rather travel worn, although he cleans up nicely when the need arises. His knee length boots have also seen a lot of travel.

There’s a knife in a scabbard at his belt – both scabbard and belt are tooled leather. The knife is on the left. On the right is another, slightly hardened leather case, in which he carries his flute, which is one of the tools of his Skald trade. Most of the time, he also carries a leather courier bag.

When on the road, he wears a sturdy leather jerkin, which gives him a slight measure of protection.

Ari was born in Kragholm, 199 years after Asgard was cut off in the early days of the War of Reaving, and lived there in his early years. With a Skald mother and a warrior/scholar father, he was brought up on the sagas and histories and surrounded by music, and a lot of it took. Of the two, he took more after his mother than his father.

His brother was born when he was nine, and by the age of fourteen, Ari was bored of the little shrimp, and told his parents he wanted to be a Skald. His mother talked to some friends at Skaldshome and he was accepted for training. The following year, his parents took him to the college, then returned home to little Radulf.

Ari stayed there studying for about twelve years, covering lore, the sagas, the histories and the runes. He also made a study of the geology, geography and ecosystem of Asgard. He eventually asked to be sent on the road as a journeyman, and spent a while running messages and generally being a travelling young Skald. He did visit Kargholm regularly, and began to realise that his little brother was beginning to actually be worth talking to, even if he took after their father, not their mother, in being rather more physical.

After he had been on the road for almost ten years, he realised he wanted to talk to his former teachers about some effects and interactions he’d seen between the basic runes and the Great Rune. He returned to Skaldshome, where he stayed for fifteen years or so, studying and mastering a dozen runes, and becoming more connected to the Great Rune. He also taught some of the newer Skalds trainees in the basics of history and the sagas.

Then, older, wiser, and better educated, Ari set out on his travels again: visiting halls and villages, telling tales, singing songs, and acting as a messenger, as well as doing some scouting and mapping.  While he was mostly travelling in Inner Asgard, he did occasionally visit others of the Nine Worlds, for the knowledge, if nothing else. Sometimes, he travels with, and works with, his brother, as they have complementary skills. At other times, he travels alone.

He does go back to Skaldshome on a regular basis, to teach the next generation, usually staying a couple of years at a time, and at this point, he’s been splitting his time between travelling and teaching for about forty years. He has had one or two long-term girlfriends in his travels, and does have an eye for the ladies, but thus far he’s shown no sign of wanting to settle down.

He is trained as a Skald and teacher, and has mastered a number of runes.

He is known to be able to take the alternative form of a golden eagle, quite often when it comes to a fight when runes aren’t getting the job done. He’s a competent enough archer to be able to shoot his prey, and people if necessary. He’s also passable in a knife fight.

He rides a bay mare of sturdy mountain stock, standing about 16 hands, by the name of Rowena. She is is of a mild temperament, but good stamina. When Ari is travelling, she bears his saddlebags, as well as a case for a bow and quiver of arrows.

Ari is the son of Duncan Wolfson Horn, a scholar and former warrior fought in the War of Reaving, and Rosalie of Clan Vind, a Skald. He has a younger brother named Radulf, who is nine years younger.

Ari stays in touch with his parents, who have mostly retired to Kragholm now, where Duncan is quite senior in Clan Horn. He also visits with his Vind grandparents, Geirr and Ásdis, in Lammhult at least once a year. He also sometimes takes to the road with his brother.

Ari has a small cottage on the outskirts of Kragholm, where his less portable possessions are. There’s always a guest room ready for Radulf if he happens to stop by.

Back to the Asgard Game Page.