Jarngrimr is a burly man, apparently in his early 30s. Standing at 6’3”, he weighs in near 240 lbs with a build that shows an active lifestyle rather than simply being a gym addict.

He wears his reddish-blond hair in a variety of styles, although it is most often kept cropped fairly short for more easy management in the field. His beard, similarly, is usually kept at a medium length, although it is constantly present.

His eyes are the gray of early storm clouds, and he has a number of runic tattoos on his arms and chest. 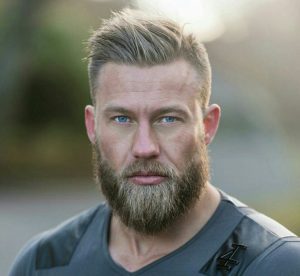 Jarngrimr’s ursine form is far from the “dancing bear” image commonly promoted by the Bear Cults throughout Creation. Tripling his normal weight, the Kodiak form is a brindle of blond and auburn fur that rises to over 9’ tall when standing. 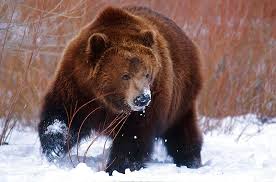 His personal sigil is the Valknut of Asgard, crossed with a lightning bolt and axe.

Jarngrimr is a loud and jovial man. His laughter punctuates nearly every comment, often coupled with winks and physical contact. A man who seemingly wears his emotions on his sleeve, he is well known to speak his mind plainly, preferring to make his feelings known rather than engaging in political double talk.

Jarngrimr is an Asgardian, through and through. He values honesty, bravery, and open speech. Although what he says and does may not be kind or “good,” there is rarely any doubt regarding his direction. He expects the same behavior from others.

He is a physical man who enjoys contests of strength and endurance, sparring, and strategy.

Jarngrimr is known to be a warrior and strategist, with his skills honed through years of personal and force-on-force combat leading the Warband. Given the nature of this work, his strategic skills tend more toward unconventional warfare than theater-based conflicts. 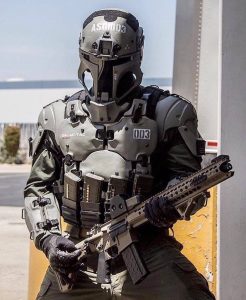 He is also a known Rune Mage with greater control over earth and air. His initial training, he has stated, was as a curse breaker. 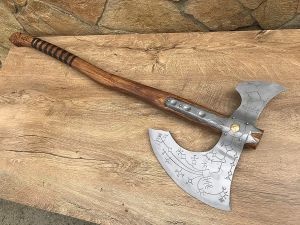 The recast form of Mjolnir, destroyed during the War of Reaving. The axe, beyond being a weapon capable of immense damage, grants the wielder enhanced weather control and returns when thrown.

The man called Jarngrimr is a composite being formed by the merger of two beings, Grimmundr Magnusson and Thor Odinson. The men were gravely injured during the Battle of Godsfall at Eskiholt, their spirits ravaged by the spirit-Ridden Jotun Svortum-Orsok, and only by binding the two together was the continued unraveling prevented.

Thor, the Asgardian Asa of Thunder, is the subject of countless sagas, stories, and songs. Boisterous and violent, Thor’s exploits as the defender of Asgard are legendary.

Grimmundr was raised in Asgard, trained by Magnus from an early age to lead. Trained in personal and magical combat, he was placed into the Warband, where he spent formative years in a number of roles. An anomaly, Grimmundr was also the only known “bear” outside of UT’s line.

Jarngrimr worked with Magnus to fight against the invading extra-planar invaders during Asgard’s War of Reaving. When Magnus “departed” the physical realm to fight their enemies metaphysically, Jarngrimr took over day to day leadership of the Nine Worlds. He continued to rule during the Time of the Closed Gates and has emerged along with Asgard as access was restored to the Rest of Creation.