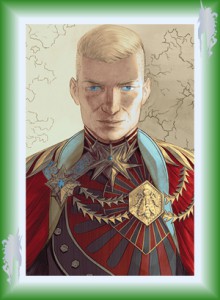 Howdy Do – Why do you use the Bee as one of your symbol, with the connection to Merovingian royalty? Are you implying that you are a descendant of the legendary Quinotaur. http://www.house-quinotaur.org/merovech.html – http://en.wikipedia.org/wiki/Merovech

“A better question to ask is why the Merovingian dynasty and others have chosen to use one of my symbols.” Lucius says with a smile.

HD – “What does the bee and the snow leopard mean? There are so many rumours about the symbolism.”

“They mean many different things to different times and places. Your mileage will vary.”

HD – Is there a mystical stair which leads to other Ambers and Chaos’?

“Even if there was such a thing, it wouldn’t be a topic for general discussion.”

HD – “Who is Ix? A lot of people say you communicate with this individual?”

“Ix is a bounty hunter from Arkham that travels with Gobbo. No wait –  wrong Continuum.” Lucius clears his throat. “Never mind.”

HD – Why do you close your border to your citizens who wish to leave?

“Only those of high blood or on business for a high blood should travel between the Shadows.”

HD – “Is that not wrong to do? Should there not be freedom of movement?”

HD – Is it true that you are seeing Princess Riva, daughter of Corwin?

Lucius shakes his head negatively, “No. However she has manufactured one child, called Gus.”

HD – “Is it true he was imprisoned or herding goats? Reports are that he was punished for his mother not marrying you.”

HD – What is your favourite type of red wine?

“Pinot Noir, except when it’s Syrah or Shiraz.”

HD – “Why is Syrah or Shiraz not favoured? Too sweet?” “Do you have a favourite scotch or whiskey?”

“Sweet or desert wines I do have on occasion. Sometimes even an occasional spirit when in the company of Doctor Orpheus in his various guises.”

HD – What is the magic of the Bears?

“The manifest destiny of faith. They are proud members of my pantheon.”

HD – “What is your connection to the different Bear Cults. Some seem wiccan and other seem Catholic.”

“They are all part of the pantheon.”

HD – Why does Benedict care so much about you and Matthew?

“You should ask him that question.”

HD – “What is the magical unique powers he attributes to you too.”

HD – Why does King Swayville address you as your late uncle Lucian?

“I wore that body for a long time; it’s more convenient for him.”

HD – “Is that proof of Swayville’s senility?”

HD – Is it true Corwin considered you part of a sophisticated weapons system?

“Corwin has learned how to tap into a fraction of my abilities, so of course he attempts to abscond with them whenever possible.”

HD – “What can he do with your abilities? Is it true he was controlling your soul?”

Lucius chuckles and says, “Corwin struggles with me to assuage his own feelings of inadequacy.”

HD – What colour do you prefer to paint your battleships and carriers and why?

“Our vessels are equipped with a secret ability known as repainting. They sometimes are gray in one place, black in others, or rainbow in the next. There are these special components on board known collectively as ‘the crew’ that is involved in the process.”

“Typically the ship finds a suitable place and time, and then the paint buckets and brushes are issued to the crew. They then become busy bees.”

HD – How come the Crown Prince Charles has such a low profile but does so much work?

A big smile and Lucius says, “Charles knows the value of doing something right the first time. Besides, he’s in the public limelight so often cutting ribbons and opening The Games and so forth that he likes a little peace and quiet.”

HD – What is the role of Barry and Arthur Bears? They seem to have posts too though Arthur is secretive

HD – Are the Twins a menace as so many call them?

Lucius laughs out loud and says, “I will simply state that they are two of my crown jewels.”

HD – “Why are they banned in so many countries? How are they doing in Badovia?”

“Badovia is doing just fine. As for their ban list, you can take that up with the respective governments in question. As for the Twins themselves, I don’t believe they pay much attention to local politics.”

HD – How do you get along with Grand Duchess Dara who is the mother or grandmother of so many of your children?

“We have a good working relationship. Charles is one of her favourites and he often soothes things over when they bubble to the top. When you’ve been married to someone so many times, through so many lives it gets complicated.”

HD – “How do you get along with Jasra, Regent of Brandenberg and your stepmother?”

“We handle whatever business arises. She seems to believe that Glen has somehow ‘run away from home’ which is a preposterous position to take.”

HD –  Is it true Dara was livid and swore to be an evil stepmother over the arrival of your son by Riva named Gus?

“You should ask her that question.”

HD – “Any chances of you and Julia together?”

“Julia is quite content managing the Edgefield for the Empire.”

HD – There are some who claim you have secret plans to annex Antilla and its vast empire. Can you comment?

“Now why would I want to annex my frontier?” Lucius says with a wink, adding in the next breath. “When I conquer fresh lands and we have lemmings, luddites and other malcontents often there is a warm reception for them somewhere in a Matthew realm. His lands are like our final frontier, we can always send people that way into exile.”

HD – “So you have Matthew and also Lambeth take your undesirables? What about that suppressing of traffic in the open shadow when you were abducting people?

Leaning forward, Lucius’ eyes twinkle. “Perhaps you refer to the interdiction of enemy commerce in warzones? Why both Antilla and Lambeth have been quite helpful in that regard, along with the Otherworld Empire and our other many allies within the Central Powers.”

HD – What is your perspective of the growing might of Asgard the new Patternlands.

“About the same as my feelings for Parys.”

“I believe in empowering my people and delegation of mundane secondary matters. If an assessment arises of import, then I’ll pay attention.”

HD – How do you plan to improve relations with your brother in law, Prince Regent Dauphin Christophe of Parys?

“I have people for that. Talk to Steve Viltoft.”

HD – How do you work with Glen, your son by Jasra. What are your thoughts when he ran away from Jasra and joined Corwin’s ship later being adopted by Corwin?

“Glen is one of my most capable children, and I’m very proud of him. He quickly outgrew his mother’s apron strings and moved on. I can respect that. It’s unfortunate that he ended up in Corwin’s orbit, however it could have been far worse.” A brief smile. “Having said that, with Glen as a topic Corwin and I do have some common ground. We both feel he has a bright future in Parys.”

HD – “Do you feel Corwin is stealing your son?”

“It’s a complex situation. Glen believes he has two fathers. He’s known Corwin as a mentor and had a relationship with him for much longer than he has with me. I am, however, his true father. Corwin can’t change that unless he’s willing to kill Glen and reincarnate him which is a step I don’t think he’d be willing to take at this time.”

HD – Is it true that certain red wines are very magical for you and bestow incredible powers if you soak in them?

“I walk in eternity, it has many consequences.”

HD – “Tell us about blood rituals, which is your favourite?”

“The ones where my enemies die at the end and their soul is put towards a constructive purpose.”

HD – Do you prefer fast or slow poisons?

“Slow poisons such as wine are the best. You can mellow out and relax, enjoy the ride. Then recover from them after a pleasant evening with good friends.” He grins and then says, “When in the company of other friends fast poisons are better, though not the fatal ones. You can’t properly savour them if they’ve moved on.”

HD – “What was your worst poisoning?”

“When I was Lucien. Check your history books, you’ll understand the reference.”

HD – What happened to the boy who had blocked blood? Rumours are that he was frozen and put into cold storage. Is that right and fair?

“We have standardized policies for blocked blood that are both fair and impartial. The individuals are not harmed and should the tests eventually turn out positive then they are able to resume their lives.”

HD – Is it true that you Ambernite or freeze your high blood opponent.

With a chuckle Lucius says, “Perhaps I have grown more merciful with the passage of my many incarnations.”