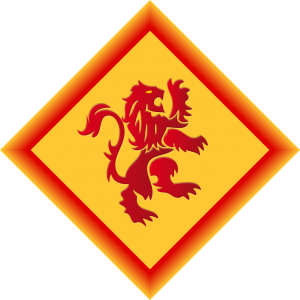 Head of House: Ian, son of Bleys of Amber and Swayvanna of Chaos

Grand Duke Ian is married to Marina, daughter of Dieter of Germania.

House Helgram has its origins among the independent duchies of the earliest days of Chaos, before the Courts was Unified under His Royal and Imperial Majesty Swayville the Great. Initially, it was considered to be a Minor House. However, its fortunes took a turn for the better when Duke Graham Helgram the Elder (aka Helgram of Helgram) married Maíread Barimen, daughter of King Swayville and Queen Alberta. House Helgram was awarded Grand Duchy status as a wedding gift. Since then, it has risen in influence, and its star is currently higher than both House Sawall and House Hendrake.

Graham and Maíread had a long and happy life, and were blessed with a number of children, who were all encouraged to bring their particular strengths to the House. In time, Duke Graham Senior was succeeded as Head of House by his eldest son, Graham Junior. Graham Junior married the beautiful Joan of Hendrake, thus cementing by matrimony the close links between the two Houses. However, the coupled were only blessed with daughters, and so, on Graham Junior’s death, the title passed through his eldest daughter, Clarissa, to her eldest son, Grand Duke Bleys.

In recent developments, however, Bleys has Abdicated as Grand Duke of Helgram in favour of his son Ian, to maintain focus on his other position as King of Amber. It is expected that good relations will be maintained between the two realms.

Details of the new Grand Ducal Line can be found here.

Helgram is one of the more populous Houses in Chaos, despite efforts by the genocidal Eric of Karm and his minion, Caine Rilgason, willingly supported by Julian Rilgason, to eradicate its members after Duchess Clarissa fell from favour in Amber, and compounded by losses during the Civil War which followed Eric’s usurping of the Amber throne. However, there are still rather fewer Helgrams than there were in times gone by. There are roughly a thousand known members of the Family who would be considered High Bloods, and are, or could potentially be Logrus capable. The more distant cousins who still bear the Family name, but are unable to walk the Logrus for one reason or another, perhaps because of a higher proportion of non-High Blood, add another couple of thousand.

Because the Eric-inspired campaign of mass murder made it significantly more dangerous for younger Helgrams to travel outside Chaos and the associated Black Zone trading realms, the House turned inwards to train and safeguard its future, and to better prepare its children for life both inside and outside the Courts. The Helgram Academy, and its development from an average private school into a premier educational establishment, is one of the most visible signs of this.

Since the death of Eric of Karm, and the later War Between the Powers, House Helgram has started looking outwards once more. This has been particularly noticeable at Amber end of the Universe, with a number of Clarissa’s descendants as active participants in Royal affairs there. Since the Grand Duke became King of Amber, further opportunities have arisen in Amber for Helgrams to make their name, and a significant number of the younger members of the House have decided to explore those opportunities. Time will tell how many of those House members stay in Amber with the splitting of the Amber and Helgram lines.

Of course, with any family of considerable size, there is a wide range of abilities between its members, and not all of the younger members make a particularly good impression on either members of the other Houses, or now that a significant number have moved South to see what opportunities there may be under Grand Duke Bleys’s patronage there. Hence “Lazy Helgrams” has become a common derogatory term in certain quarters.

House Helgram is best known for its arcane skills and knowledge, and produces many of the best mages in the Courts. However, some of its members – including the Grand Duke – also take after their more military Hendrake ancestors. The Helgram-Hendrake alliance is one of the strongest in the Courts.

Under the rule of Grand Duke Bleys, House Helgram was at the forefront of the movement for greater autonomy for the Grand Duchies of Chaos. It is not yet clear whether this policy will continue to be followed under the new Grand Duke.

Branches of the House 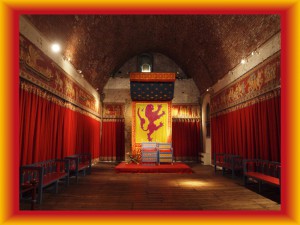 Unlike many of the other Houses, Helgram Grand Dukes are surprisingly long lived, given the dangers inherent in living in the Courts. Until Bleys’ recent abdication, it had only had three rulers: Graham the Elder, Graham the Younger, and Bleys. The new Grand Duke is Bleys’ eldest son, Ian.

The currently Ruling Line comprises the descendants of Grand Duke Graham the Younger and his wife Joan. Graham and his wife were only blessed with daughters, of which Clarissa was the eldest. House Succession allows the passing through the female line, if there are sons of the next generation, and therefore, when Graham died during the Patternfall War, the Grand Ducal title passed to Clarissa’s eldest son, Bleys.

With the splitting of the thrones of Helgram and Amber, the Helgram Ruling Line now descends from Grand Duke Ian. His line is currently well established and populous, and there seems little likelihood of a further succession through the female line for at least the next three generations.

Clarissa has five younger sisters, all of whom are still alive: the Duchesses Rosemary, Athena, Marguerita and Juanita. They are members of the Ruling Branch, but are not in the Senior line of succession.

As mentioned above, while Graham the Younger failed to have sons, he did have a lot of siblings, and these were the respective heads of the cadet branches of House Helgram, although one or two have since died and their children have succeeded them. In birth order, these are:

To differentiate them from the Ducal Line, descendants of these siblings will usually either hyphenate their surname with the first name of their ancestor, or take it as a second given name (either on its own, or with a patronymic). For example, Jowan Daveth-Helgram, grandson of Duke Daveth; Ronan Uilliam-Helgram, son of Uilliam, an illegitimate child of Duke William; or Llewellyn Stephenson-Helgram.

Brief descriptions of  all of the children of Graham Senior and Mairead can be found here.

It isn’t possible to format a Family Tree of the complexity of the Helgram one within the Wiki. However, for an HTML version, click here.

For the most part, Grand Duke Bleys allowed each of the various departments of the House to run their own day-to-day affairs. What passes for the Helgram Cabinet is comprised of these department heads, although it rarely meets except in emergencies or formal occasions. The Grand Duke and his Crown Prince keep an overall eye on things, and either them could call and chair a Cabinet meeting if required.

Bleys has threatened to import his nephew, Geran Brandson-Barriman, Treasurer of Amber and a known stickler for the financial rules, when major budget sins came out. However, usually Helgrams as a family are smart enough to keep the corruption minor enough to be not be worth a crackdown!

Details of the senior House members and heads of department can be found here.

While Helgram isn’t known for being a particularly martial House, its strong links with House Hendrake mean that it has a very competent standing military. This is commanded by Warmistress Joan, a Hendrake by birth, and the widow of the previous Grand Duke, Graham junior.

Policing duties were originally also handled by the Helgram army. However, eventually the more liberal members of the House insisted in separation between the two, leading to the formation of the small Helgram police force, under the command of Chief Constable Finn Harrison-Helgram. Most of its duties relate to the main public and communal areas of Helgramways. Within the sub-Ways, the Ways owner can make his own policing arrangements, and will deal with most of the everyday matters. However, the House Police do get involved if a serious crime, such as murder or rape, takes place.

The House has an extensive diplomatic service, to both maintain relations with the other Houses, and co-ordinate its various Embassies across Creation. This is overseen by Duchess Eleanor Helgram, younger daughter of Graham the Elder and his wife, who manages to keep everything on track and co-ordinated. Helgram Ambassadors are known by the title Representative.

Full Embassies are maintained with the Dragon Court of King Swayville, the various Great Houses of Chaos, the Black Zone, the Court of Amber, the Amber Golden Circle, Brandenberg (ruled by Queen Jasra, daughter of Suhuy, on behalf of King Brand), Parys (ruled by Dauphin Christophe, on behalf of King Corwin), and the three great fortress worlds of Avernus, Xanadu and Diem Bien Phu.

The Black Zone is the Chaos equivalent of Amber’s Golden Circle. It is comprised of a myriad of semi-Real Shadows which have varying degrees of allegiance or otherwise to the Courts itself, or individual Houses within the Courts. Historically, House Helgram only had limited interests in the region. However, since the upheaval of the War Between the Powers, and the opportunities that has created, that has changed. The House has recently sent a Representative to the region, and is now making significant progress there.

The Zócalo is the Helgram trading base in the Black Zone, and comes under the purview of Representative Jowan. It is a centre for trade and commerce, with open access to both the Courts and the Black Zone, and direct but guarded connections to the  Helgram Marketplace and the High Redoubt, which is the closest place to a Helgram capital in the Black Zone. It is guarded by Helgram troops. For further details, see the Zócalo page