Antilla Station was originally founded as the terminal of the Antilla Railway located across the Strait and a shadow away from Port Matthew on Antilla or E1 (proper). As the lines from each territory ended at Port Matthew it became a major transfer point. This was enhanced by the Jorrah Doctrine that made the Parys-Antilla Railway conditional upon the station being a mile away from the main station. This is because Queen Jorrah (Princess Dauphine at the time) threatened to torpedo the deal unless there was a mile between any track that led to Ultima Terra (ruled by her half brother Lucius) and Parys.

Antilla Station is the de facto headquarters of the Antilla Railway and capital for the Antilla Railway Empire. It is, unlike the countryside,  a polyglot hodgepodge of different people and languages. Millions travel through the city every day while it has a permanent population of  at least 30 million. Antilla Station has a very good security and the streets are patrolled by police and German Shepherds regularly.

The Gateway To The Multiverses, it is separate from the rest of Antilla. Anything you could want can be found here and so many go through it regularly that it is quite the adventure. A lot of Family tend to pass through here as it is a neutral and well connected area. Amongst those things that are a draw is the shopping and the food/drink.

Amongst recent developments is a coffee-shop war, of sorts.

Recently been boycotted and protests with sit ins and graffiti by the “Radicals and Nihilists Dominate Old Moguls” (RaNDOM).

They must have imported off-shadow markers as they are impossible to clean off by normal methods.

The staff repeatedly chase them off and call the authorities, because they never buy anything and continually deface property (charges brought against the graffiti artists for defacing property, and for the guitar players for squatting/loitering–they are not customers).

There is no fountain nearby either, for which the staff is grateful.

McBucks-similar to Earth Prime McDonalds. In war with ElkBucks. Serve boiling hot coffee… and disclaimers all over so injuries are the fault of anyone buying the coffee.

Bertie Wesker (son of Albert Wesker) opened a new gallery and performance space.  The new facility is named the Kaleida.  The hall is remiscent of the Kimmel Center in Philadelphia. Acoustics and natural lighting are excellent. Rumor has it that the facility has been through thorough security review by the Umbrella Corporation. Critics sniff that Bertie’s aesthetic choices are too conventional and not sufficiently daring.  Booked concerts include jazz and bluegrass.  Art on the walls avoids the abstract or avante-garde.  It does have an excellent coffee house on premises.

After only a few days coffee shop at the Kaleida has been taken over by a local entrepreneur and retitled Coffee of Doom with a vibe that’s more dark humour than goth.  (Unless I get a GM veto, I’m hauling in the staff of the coffee shop from the webcomic “Questionable Content”)
See http://questionablecontent.wikia.com/wiki/Coffee_of_DoomAnd http://questionablecontent.wikia.com/wiki/Coffee_of_Doom_specials
[Please visit the strip, you will get a kick out of it!]

The staff is currently Dora (managing), with Faye, Hannah, and Emily as servers.  Don’t use the word barista- Faye will do something violent, Hanners will freak out over the blood, and Emily will try to make artwork out of the broken furniture.

Faye is always being banished to take out the trash to get her out of the way. Hanners is usually stuck with cleaning up any messes, including blood or a trashing of the bathroom, and she hates doing that.
The counter help has a 9 iron to take to difficult (ungodly orders) customers and does have a Malaysian Battle Spatula [540] and a broadsword on hand behind the counter.
They do not stoop to writing names on the cups, but they can use descriptors for a customer that might not be that nice. Be nice to whoever is pouring/mixing and they’ll remember that when blurting out who or what the person should be that needs to claim the order.
Javabean-High traffic location (near Hub 43, midstrip). It has three sides open, lovely patio with blooming tropical vines, padded seating, wide awnings to stick out over the sidewalk/paved way outside to allow shade but free movement (as required). The building is golden tan, awnings of terracotta, tabletops of gold veined white marble and dark plum cushions. At the sidewalk there is a water fountain and water trough/bowl of fine porcelain for the members of the patrolling factions.

There is a niche of walk-up ‘to go’ express for coffee and a pastry, and the prices are quite good. They offer good coffee, pastries, and a small menu of upscale sandwiches. Javabean is open for business. On the carefully posted (framed and hung) legal paperwork the owner is listed as Ryan Munson-Helgram.

Patrons may walk up to the to-go counter, step inside and visit the counter, or sit and be waited upon by the friendly staff. Tipping is allowed at the counter only, and there are boxes, fine print says it’s shared by the entire staff on duty.

Prices are reasonable for several of the drink options. Some pastries are reasonable and at least one sandwich a day is the ‘special’. (house roast $1 and up, good kona $2 and up, most drinks top at $3, a few can go to $6 (4 shots expresso, mocha syrup, whipped cream etc) ) Hot chocolate too ($1 and $2) IF you try to order a really difficult drink the barista will tell the customer “That is a $50 drink, sure you don’t want one off the menu instead?”

The cups are plum colored with white graphics showing a stylized coffeebean (drawn) and Javabean. The lids are quite lockon and resistant to spilling. Why Drink Elk[blackedout] and Mc[blackedout]-juice when you can have fresh fair-trade coffee? Javabean has good dark roast starting at only $1… Drink Classy. Drink Flavor. Drink Javabean! 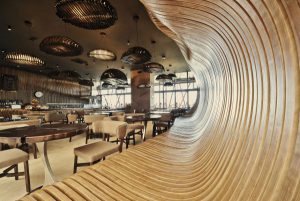 (Rexford is known as the breadbasket of Thelbane. Its fertile ground grows a wide range of exotic fruits, vegetables and has the perfect climate for producing the finest coffee beans and tea leaves)

This is a chain, and many other shops are open throughout other areas of creation.