This Earth variant, based on a Rock, is located on the Black Road Axis between Amber and Chaos near Ancient Earth (which intersects the Chakra Line, Black Road Line and the Asgard-Triskelion/Bayport Line). It is closer to Amber and it has a long history of meddling by Dworkin, Oberon and many of the House of Oberon over the many millennia.

Characters with potential interest can have one island or city state. The GM would prefer to work with an existing character though those with fewer characters, new characters may be available. The idea is to create new mythologies inside Solstice’s tens of thousands of years of documented history that may be minor footnotes in known libraries, and custom-create some new prophecies, PC dedicated plots needing other PCs to help them.

The tech level across the Shadow is currently set in the late-1980s (c.1988). The Industrial Revolution started under Charlamagne (Carolus Magnus; 2 April 747 – 28 January 814), but the knowledge that was lost with the Roman Empire in the real world, wasn’t lost on this one. Basically, there wasn’t a Dark Ages, so there isn’t a future Age of Enlightenment or the Renaissance in the offing 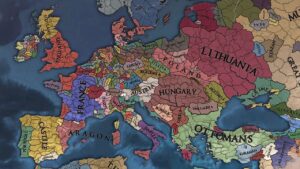 The year, map and politics are as of 1452. The largest powers on the European Continent are the Catholic Church (pre-Reformation) and the Holy Roman Empire, along with the Anglo-French alliance. The rest of the continent is divided into smaller principalities and kingdoms.

The English and Scottish Crowns have not been united, and England and Scotland continue to have an…interesting…relationship.

The current Pope is the humanist Pope Nicholas V. He recently issued a Papal Bull to abolish Salic Law (the rule by which, in certain sovereign dynasties, persons descended from a previous sovereign only through a woman were excluded from succession to the throne),  replacing it with precedents in England and Iberia, women pass the succession to their children and also inherit if there are no male heirs. The Pope has also called the Sarzana Council, to discuss reforms to marriage restrictions and property rights.

The Holy Roman Emperor is Frederick III, the Peaceful, of the House of Habsburg (Hapsburg). He is based in Vienna, but the technical capital is Frankfurt am Main. Wants to expand by marrying his children across the continent, rather than go to war.

Constantinople is still technically European, but is being threatened by the Ottomans, who have made extensive gains in the Balkans.

The English and French have had the usual on again and off again wars, but are currently at peace. Agincourt happened, and King Henry V (b.1386) married Catherine de Valois, daughter of King Charles VI of France (and younger sister to the Yorkist Richard II’s second Queen, Isabella). As part of the wedding arrangement, he was appointed heir to King Charles and the French Throne.The two thrones of France and England are still technically separate, to appease the French nobles, but are held in the same person. The Angevin lands (red on the map) are no longer linked to the throne of France.

Catherine de Valois died in childbirth in December 1421, and her son (who otherwise would have be come Henry VI) was stillborn. Henry V, himself, did not die in August 1422, and became King of France in December 1422, having overturned the defeat suffered by his brother Thomas in March 1421, at the Battle of Bauge (Thomas died in the battle). He undertook a second marriage in 1425, to Marie de Valois (1393-1446), another daughter of Charles VI (whose mother, Isabeau, persuaded her to leave a nunnery in 1324, after her father’s death), but this was also childless. The King and Queen did share love and mutual respect, however, and he honestly mourned her death.

At the age of 65, Henry remains healthy and active, and having always been a soldier, he hasn’t let himself run to seed, so he has the physique and appearance of someone ten years younger. Under pressure from the French nobles, who felt that five years of mourning were enough, he married for the third time in 1451, to Margaret of Valois-Anjou (b.1430, the second eldest daughter of Rene, King of Naples and Isabella, Duchess of Lorraine), on the occasion of her 21st birthday. It is rumoured that Margaret is pregnant with their first child. In the meantime, his heir apparent is his brother John of Lancaster, Duke of Bedford (b.1389).

Cardinal Beaufort caught and burned Joan of Arc in the late-1420s, did not die early and remains Chancellor of England. He has been elevated to Archbishop of Canterbury from his see of Ely. His nephew Beaufort, Duke of Somerset is also an important advisor to the King and his new Queen.

Given the strong Lancastrian King Henry V, rather than the weak Henry IV, the House of York, which descends from Edmund of Langley, 1st Duke of York (younger brother of John of Gaunt, the Lancaster progenitor) has remained relatively loyal to the King, approving of his policies in France. There does, however, remains a grievance between Henry and Richard, 3rd Duke of York (b.1411), as the latter’s father was executed by Henry for treason, shortly before Agincourt.

An agreement was reached between Henry and his cousin in 1440, appointing the latter as Lieutenant of Ireland. His eldest son, Edward, is currently 10 years old. 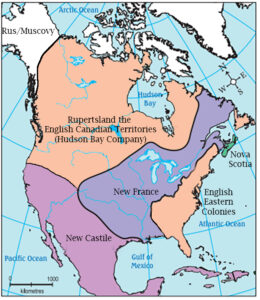 Paradoxically the New World is colonized according to the boundaries c.1750, with the following varients.

Castile has the Spanish Empire. It is known as New Castile instead of New Spain, and includes Cuba.

Florida has switched between France and Spain, but the English currently have it.

Asia and Africa are ruled by their own empires, kingdoms and principalities.