The plain of Idhavoll is the center of the government within Inner Asgard.  It consists of the majority of the buildings and locations annotated to legend.  It is from this location that the “governing” of Asgard, as a whole, is conducted.

Asgard is the smallest of the Nine Worlds, although one feels its vastness when one sets foot here after crossing the Bifrost, the bridge of flames, the Rainbow Bridge. The Bifrost is not always visible, and often is only accessible when Heimdall wills it so, to let in the warriors killed in battle or to let the Aesir come or go.

The first home is located at the end of Bifrost and belongs to Heimdall the white Aesir, guardian of Asgard. Its name is Himinbjorg, the ‘castle in the sky’. Although this god is especially friendly to Midgard’s people, he will not let anyone in who is not explicitly invited by one of Asgard’s inhabitants. He will not usually attack humans but will simply forbid their entry and the huge fence, more than 30 feet tall, will not open.

There is no city in Asgard; however the divine halls are grouped together. Seasons in Asgard are the same as in Midgard, which may explain the interest of the gods for the world of man and its beauty. 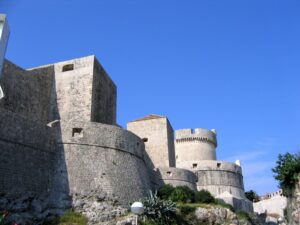 The Garðr, or enclosure wall of Asgard, is the giant-built fortification that surrounds the plains of Idhavoll.  Built high and strong enough to repel any forseen attacks upon the seat of the Asir, the fortification still stands, although it has been reinforced and armed with much greater weaponry since Asgard’s return to power.

Sessrúmnir (Old Norse “seat-room” or “seat-roomer”) is both the goddess Freyja’s hall located in Fólkvangr, a field where Freyja receives half of those who die in battle.

Valholl is Odin’s banquet hall, which welcomes those warriors who died in combat, and who have not been sent to Freya’s Hall, Folkvang. The hall is so high it is difficult to see its ceiling, and it is covered in gold. It shines like the sun. It holds six hundred and forty doors; each of them is so large that nine hundred and sixty warriors could walk through each of them at the same time. By the western door a great, gaunt wolf stands guard, and an eagle constantly flies over its roof.

The framework is made out of spears, the roof out of shields and several suits of scale armor lie on the building’s benches. Here the Einherjar (unique warriors who died in combat, chosen by Odin) drink, recover their strength and train while they wait for Ragnarök. Every day they fight each other, and when the evening comes, the wounded recover their vigor and all return to feast in the hall. Standing on the rooftop, the goat Heidrun grazes on the branches of Yggdrasill that fall here. Mead comes from its udder and fills several vats every day.

While mead flows constantly, good food was also promised to the Einherjar. The boar Sehrimnir is sacrificed every day and his meat served by Asgard’s cook himself, Andhrimnir. The animal is reborn every evening to be sacrificed again the day after. Warriors feast on his flesh, but Odin, the supreme Aesir, has none of it. Instead he feeds his two wolves Geri and Freki and drinks with his unique warriors.