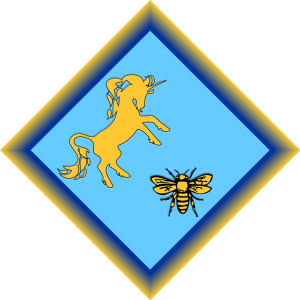 Head of House: In dispute

The house colours are yellow and blue. However, for some reason lost in the mists of time, it has two different heraldic symbols – some members of the House use a yellow unicorn on blue, while others substitute a bee for the unicorn.

Geib Emperor of the Void Missing!

The presumed intellectually challenged and insane Emperor Raydolph of the Void has been declared missing. His Regent Sister Melynn Jasra announced it to be shared with Void Embassies across Creation and Abyss. With the childlessness that runs in the Geib family common, the Imperial Succession will go to the son of the youngest son of King Andreas XXXIII – Albert, Duke of Chaotic Lakes. Albert has only daughters meaning that the successor is his only brother Atticus who has no sons and only daughters as well. Following the Royal Constitution of Andreas I, the semi salic / quasi tanist style – succession will go the sons of the late Emperor’s daughters with the eldest daughter Malkuth Naomi has several surviving grandsons.
Emperor Andreas XXXIII had two earlier sons Ernst XXII and Andreas XXIV who died childless. The succession then went to Raydolph’s father Milton Mal-Alville then Raydolph. The Brandenberg Government has issued its disapproval of the succession going to Malkuth Naomi citing the Princess’ extreme religious views. Queen Jasra said that the succession needs to be revisited during the reign of of Albert.  The family of the Malkuth along with the family of the second oldest Imperial daughter of Andreas XXXIII, Princess Bella  told Jasra to mind her own business and that she could not separate ‘fly shit from pepper’. Queen Jasra said that her mother Geib Imperial Princess LaTrice (aka Lady Geib, Suhuy’s wife) was the preferred (though 3rd) daughter of King Andreas XXXIII suggesting a Brandenberg Battlefleet may be happy to visit the lands of Malkuth and Bella to show them some manners. Wars inside the Geib Family are ongoing at any moment in time.  Regent Merlynn Jasra and her Morganatic  husband Baron Miska the Lord High Demon are facing at least 14 different rebellions and internal conflicts between the different descendants of Albert XXXIII.
King Brand of Brandenberg called Malkuth and Bella some horrible names – unmentionable in print – and suggested that a Brandenberg involvement to settle the Geib succession would result in Jasra’s son Rinaldo being named Emperor.  Regent Merlynn-Jasra said that the central government did not need assistance but was working to a transition to Emperor Albert.